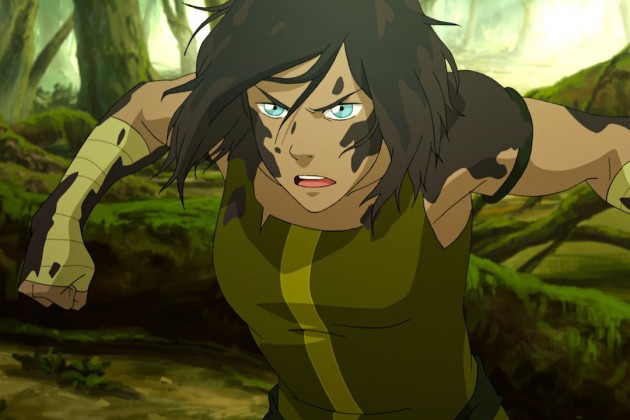 The episode opens with a lead in to Prince Wu’s coronation as Kuvira, Bolin, and Varrick all arrive in Republic City to hand over power. We get a quick and welcome reunion between Mako and Bolin which was a very nice touch just to remind us that these two are still brothers working on different sides of the so called fence. We’re bombarded with even more scenes showcasing just how much of a bumbling idiot Wu is as he gets shafted out of his presidential suite at the hotel by Kuvira who wants to make her power known to everyone involved.

Tenzin senses Kuvira’s intentions, but President Raiku reassures him that there’s no reason for her to hold on to power now that the Earth Kingdom is all back together. Right. Tenzin is still very wary of the events and begins to worry about Korra’s unknown whereabouts.

Toph is Back! And She’s Still Toph

This week’s episode didn’t skimp out on the promise of giving us some good ol’ Toph/Avatar training that Last Airbender fans are all too familiar with. It’s been an upwards of 60 years since she first trained an Avatar in the classic episode Bitter Work and she’s still just as honest and ham-fisted as ever as she beats the living metal(literally?) out of Korra in their training sessions. Unlike Aang who never responded well to Toph’s hard nosed antics, Korra rises to the challenge to conquer the legendary Bei Fong. And she fails…miserably.

We get some really fun bits of character and even a bit of history from Toph as she trains Korra. She’s still the same sarcastic hard as nails Blind Bandit we met way back in the day. She’s grown old and wise, but the things we really love about her haven’t changed one bit.

This week’s Korra story line may not have been the most eventful but there were some key take aways from her not so fun filled training sessions. Toph’s relentless style may not have put Korra quite back on track, but we did learn that Korra still has some of the poisonous metal from her fight with the Red Lotus remaining in her body. Despite claiming to want the metal taken out, Korra just can’t part with the responsibility it seems to represent. After a couple of failed attempts by Toph to remove it, she claims that the only person who can fix this is Korra herself(which is eerily similar to Katara’s remarks from last week).

Kuvira throws a party at the Four Elements Hotel immediately before the Corronation to begin stirring up a good bit of drama. Bolin arrives at the party and immediately notices his ex-girlfriend Eska is around. Awkward. There’s a good bit of dialog exchanged between Bolin and Mako about where each of them have ended up. Mako clearly isn’t happy about his future babysitting Prince Wu, but isn’t too sure Bolin’s spot on Team Kuvira is really what it’s cracked up to be. We also get to catch up with Suyin who has bit of an underhanded exchange with her son Bataar Jr(let’s just call him jr.). There’s clearly a bit of family bitterness here as Bataar flaunts his engagement to Kuvira. We also learn the city of Zaofu decided to remain neutral after Ba Sing Se and the earth kingdom fell after the events of book 3.

The Corronation begins as planned as he receives his pin “royal brooch”. Wu gives a pretty unimpressive speech right before he awards Kuvira with the Kyoshi Metal of Freedom. This is the moment where Kuvira lays out the first details of grand plan to the world. Right before totally crushing the Kyoshi Metal of Freedom, Kuvira declares her unwillingness to forfeit her rule over the earth kingdom to a leader as incompetent as Wu. Instead of returning power to Raiku or Wu, she announces her plans to break away from the world leaders and Republic City to begin a new Empire under her own rule.

Her speech was nothing short of character defining as she wins the love of the crowd with her big news. The politicians may be terrified, but the press and people of Republic City love the idea of a leader who calls out the archaic nature of a kingdom ruled by bloodlines. Even though this was a huge move, it’s very clear that she’s still playing for a much bigger win the the Game of Thrones…errr…her new empire with a capital “E”.

How exactly did Padme say it? “This is how liberty dies…with thunderous applause”

There’s quite a bit of fallout to cover after Kuvira’s massive declaration and one of my favorite’s was Bolin’s uneasy reaction. He clearly realizes the evils of the situation and even goes as far as to call Kuvira on it. Bolin even turns to Varrick(who is more than excited by the idea of the money he’d make off of another war) for advice. I know Bolin isn’t exactly the sharpest rock on the cliff, but I can’t believe he’s falling in league with the bad guys again. Just when you thought he might flip flop sides, Mako calls him on his poor choice of leadership and the two get into another fight. Before Bolin has any time to think through the situation, he decides to swallow the kool-aid for the sake of an argument.

Suyin is elected by the world leaders to try and convince Kuvira to step down. We get a real sense as to why Kuvira is fighting to rule the kingdom she’s already united. Because she’s the only one who stepped up to do the dirty work. While the politicians bogged themselves down in bureaucracy and Zhoufu decided not to fight, Kuvira was the one who rose to occasion and fought the difficult battles to bring the entire earth kingdom back together. She did what nobody else at the time was willing to do.

Prince Wu’s clear lack of any real leadership is a problem that could easily lead to another war in the earth kingdom. The world leaders know they can control a weak leader which is why they chose him in the first place. Kuvira is clearly using this as an opportunity to seize power herself, but I can’t say she’s wrong in believing she’d be a more capable leader. Before the scene ended in total adversity, I found it interesting that Kuvira brought back the idea of equality among all nations…a core theme that has in many ways been the driving force behind the entire series.

Tenzin Commissions a Search For Korra

It looks like Tenzin is going to get tied up with the politics in Republic City, but he’s not going to let that keep him from searching for Korra. Tenzin sends out he three kids; Meelo, Ikki, and Jinora, to search for Korra so that she knows about the war that is likely about to begin.

The final scene ended with Kuvira and Varrick on the train traveling back to the Earth Kingdom. They have some sort of material from Republic City in a capsule and Kuvira tells Varrick that developing the new technology is top priority.

It seems she’s already planning on an Avatar intervention.

The Corronation was big on development, but light on actual plot advancement. Korra’s story with Toph in the swamp was a lot of fun, but hardly getting the avatar any closer to Republic City. Their exchanges were fun and Korra’s internal battle this season is becoming even more clear.

The story in Republic City was really exciting in all the same ways as an average episode of Game of Thrones. There was lots of standing around and talking about family drama, history, and politics and all of it was awesome! My knee jerk reaction is to say Kuvira is evil, but when you step back and look at her arguments and what she’s accomplished against the leaders of Republic City, she’s actually got some really great points. She’s undoubtably got some evil motives, but in reality her actions and arguments exist the grey areas. We’ve still got a great deal to learn about her goals and ambitions, but we’re really starting to understand what Korra will be up against once she makes it back home.

The Corronation still continues to carry the Empire Strikes Back vibe thanks to the ominous tone in Republic City intercut with Korra’s training with the borderline senile master in the swamp. The parallels continue to be fun and shocking.

We’re now three episodes end and I think I can safely say that I still have no idea where this endgame is heading, but there’s no doubt we’ll see some sort of war break out before this is all done. This week’s episode lacked the character depth last week’s episode, but it still delivered on some compelling developments.

Original Story can be found at Renegade Cinema