We all live in a world filled with the gift of technology. Through our phones, tablets, or laptops people of all ages are more connected and in-tune with the world we live in than ever before. We can talk to strangers across the globe through the likes of video gaming or even find the love of our lives in our dating profiles that bring us together. If you’re on board with all of these ideas, maybe you should check out Juno director Jason Reitman‘s latest film Men, Women & Children  which argues all of our connectivity through the world wide web has actually made us more alone than ever before. 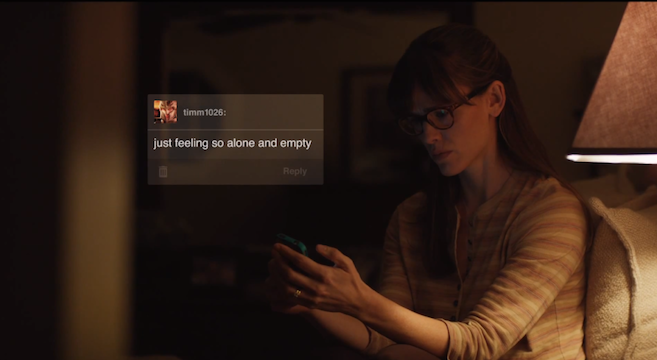 Men, Women & Children follows a number of different stories that are loosely connected  as they follow people wrestling to be content in their careers, sex lives, or coming into adulthood. Don Trubly(Adam Sandler) struggles to find excitement in his marriage as his wife Helen (Rosemarie DeWitt) and son Chris(Travis Tope) drift further and further from his interest. Helen begins looking at dating websites while Chris turns to porn to fulfill his sexual fantasies. Patricia(Jennifer Garner) wants to make sure her daughter Brandy (Kaitlyn Dever) is safe online and monitors all of her Facebook posts, texts, and emails. A former football star Kent (Dean Norris) struggles to accept that his son Tim(Ansel Elgort) has quit the team in favor of the video game Guild Wars. Donna(Judy Greer) wants her daughter Hannah to break into acting(Olivia Crocicchia) and begins building an online portfolio featuring Hannah in some not so tasteful poses. From a narrative standpoint, these story lines are only loosely connected, but the film is aiming at some larger ideas to bring this entire story together.

The movie not so subtly lays on its larger than life ideas by opening with a brief monologue about the Voyager Space Probe (as read by the lovely voice of Emma Thompson). Earth is nothing but a speck of dust in the grand scheme of the universe yet so many things happen on our little home rock of existence. The movie then cuts to the deeply personal stories of our main characters as they wrestle with relating to one another amidst our super saturated world of technology.

I see what you’re doing there Mr. Reitman…despite the fact we’re so small, our connection to each other is more crucial than anything else in the universe.

Men, Women & Children isn’t remotely subtle in any of the ideas it’s trying to get across. In fact I’d say between some of the dialog and stylistic choices in the direction, this movie is flat out heavy handed in its sentiment of our world being overrun with technology.  The film’s fatal flaw is that it doesn’t trust the audience to have these epiphanies on their own, but rather holds your hand a bit too tight. This leads to the movie feeling a bit pretentious in its presentation.

Even with it’s heavy handed nature, the film hits on some really touching and upsetting truths about technology and how it creates this false sense of connection that harms relationships more than it helps them. This is most interesting when the movie focuses on the teen characters whose entire social circles and understanding of reality is built on the internet. Parents who don’t fully understand how it all works make rash decisions based on what they think they know to the detriment of their kids. Kids base their perception of sex and how to interact with each other based on what their peers say over the internet. These observations and interactions all lead to unavoidable train wrecks that damage all of these characters and their perception of the real world.

The ideas this movie are exploring make for some legitimately thoughtful moments revealing the truth in our state of society. Unfortunately these big ideas come at the cost of the characters who act more or less like glorified caricatures of real people. That’s not to say that these characters aren’t interesting or even believable, but often times they lack authenticity. When they aren’t acting like real people, they come across like soap opera characters auditioning for the next Twilight film which feels flat out manipulative.

Even though some of the character writing feels a tinge artificial, the actors cast in these roles are pitch perfect. Adam Sandler plays a pretty mellow and burned out dad and it’s probably his most believable performance since 2009’s Funny People. Olivia Crocicchia and Ansel Elgort lead the exceptional young cast as they all blow their respective roles out of the water. Even when the script feels fake, the chemistry between the actors is absolute dynamite. The movie finds a sense of humor about itself thanks to decision to cast a number of comedians in dramatic roles.  Reitman continues to be an actor’s director who can bring the very best out of his cast even when the material isn’t always on point.

Men, Women & Children is a really good movie aspiring to deliver game changing ideas about technology and how it shapes our relationships in the twenty-first century. It gets a little too tied up in its ambition and comes across as a well intentioned misfire. The actors are all at the top of their game and the ideas at play are interesting even if the delivery believes in itself a little too much. Even with the heavy handed message and pretty obvious baiting for emotional reactions, the movie still delivers a few well earned feels to walk away with. It may not be a ‘great’ movie, but it’s still the type of film Saturday morning matinees are made of. 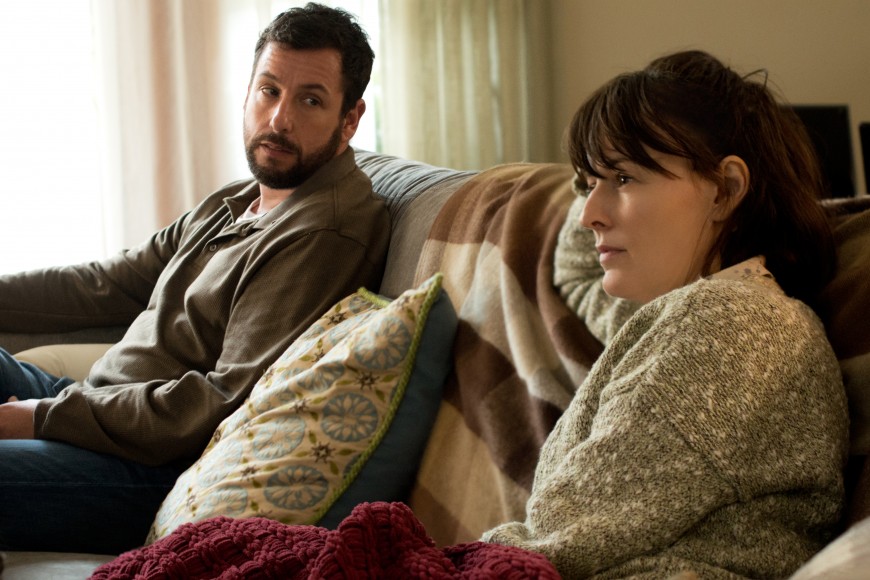 These story lines all feel very honest, plausible, and relatable to the world we all live in. A couple cheating on each other after years into a burned out marriage, a father who can’t relate to his son, an over protective mother who monitors every detail of her daughter’s digital life. These are all real scenarios and they all make for some heartbreaking material. The larger story the film is trying to tell about human connectivity on the other hand, doesn’t quite come together as intended.

The casting in this movie was spot on. Every actor find their characters voice and lands the chemistry with the other actors. Adam Sandler turns in one of his best performances in years. The real achilles heel of the characters in the film is the scripting which gives these otherwise excellent performances a hint of superficiality.

Jason Reitman is still great at working with actors and I believe he set out to tell this story with all of the best intentions. Unfortunately he held onto the messaging just a bit too tight which leads to a heavy handed feeling that steals from the honesty the story is trying to reveal. His direction is both the best and the worst part of the movie because he still hits on some of the universal truth and issues of the twenty first century; even when its at the cost of organic storytelling.

Overall Effectiveness of the Film: 6.5

This is still a good movie that still tells the story it set out to tell. I still felt the feels it was luring me into and I honestly didn’t mind. Even though you can’t shake the feeling of manipulation from time to time, the truths the film explores are still as relevant as ever.

Original Story can be found at Renegade Cinema