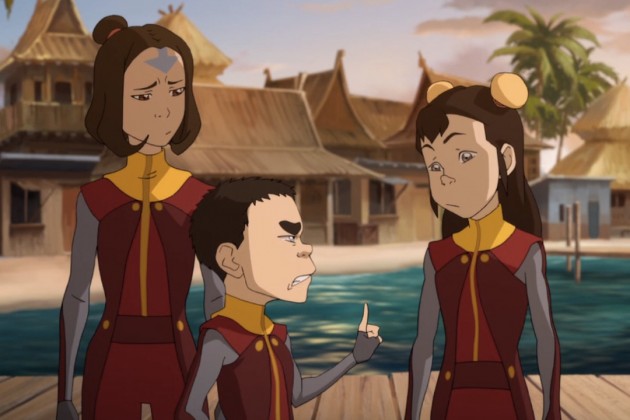 The Misadventures of the Three Airbending Stooges

The Calling seems like it’s trying to channel the spirit of Avatar: The Last Airbender by following Jinora, Ikki, and Meelo as they search for the long last Avatar Korra. The episode opens as Tenzin and Pema send the trio off into the unknown. With Tenzin tied down to all of the politics in Republic City, it’s left to the kids to get the job done. The trio travel to temples, small towns, and eventually into the earth kingdom. This makes way for a number of scenes featuring some cartoonish sibling rivalry the likes we haven’t seen since Sokka and Katara roamed the screen.

In one town Meelo flirts with one of the local girls while another spot brings us back to the fishing village Korra visited in Korra Alone. In these scenes we get to explore the family dynamics as each child plays into the stereotypical three child family(youngest, middle, oldest). It may not do wonders for plot advancement, but it does make for some moderately entertaining banter.

Yes, the Star Wars parallels continue to be staggering as Korra trains with the swamp hermit Toph. This week’s training session continued Toph’s signature take no prisoners approach to training as Korra struggled to confront her inner demons. When asked what it was like to train Aang, Toph’s response was “there was not much to tell, saying that she threw some rocks at the Avatar, he got all whiny, and Sokka fell in a hole” which was a great little nod to the earlier series.

These little exchanges between Toph and Korra have been fun, but I’m not so sure it’s really been necessary to her training. So far these scenes have relied heavily on references to the original series which is great fan service, but so far I’m not convinced it’s really bringing a whole lot to the story…although you’ve gotta love Toph’s hard as nails personality.

As Jinora mediates and tries to find Korra’s Avatar energy, Ikki and Meelo get in a little bit of a fight after Meelo throws all of their food in the river(not exactly the brightest kid). Meelo takes their sky bison pepper to hunt for food while Ikki goes into the wild to enjoy some space. After being hit with a tree in the forrest, Ikki is is kidnapped by two different Earth Nation soldiers. She is taken to their outpost, tied up, and prepped for interrogation. Luckily she was kidnapped by two less than competent foot soldiers. Both of these guys are pretty dumb and get involved in her family drama. Eventually they even decide to offer their help for find the Avatar, but Ikki refuses and insists she would rather sit around and chat.

After Meelo returns to the camp after eating some poisonous berries, Jinora comes out of her meditative state and realizes Ikki is missing. It doesn’t take long for the two of them to find Ikki and even throw a door at the two dingbat guards. They take back their sister and their food before heading to the swamp.

This scene plays comedically as both men empathize with Ikki’s family drama, but there are a couple of pieces of info divulged in between the soldiers Ikki is rescued. Kuvira has brought together almost the entire Earth Nation save for Zaofu. Kuvira has carefully and quietly begun moving troops in preparation of a full on invasion. It looks like we’ve got a pretty good idea of where the story moves next.

Korra Reflects On Past Foes

If her training with Toph has meant anything, it’s been dealing with all of the emotional damage dealt to her by her enemies. While training in the swamp, Korra sees flashes of Amon, Unalaq, and Zaheer before she passes out. Toph attributes the incident to the metal that remains in Korra’s body. Toph gives a rather telegraphed yet insightful talk about how Korra’s enemies stood on good ideas, but took things to dangerous extremes. Amon fought for equality, Unalaq for the spirits, and Zaheer for freedom. This brings Korra to wrestle with the fact that maybe she could learn a thing or three from her old foes.

Bringing back a number of old threads and call backs is really cool, but I think the show might just be laying it on a little heavy. The idea that all of Korra’s battles have brought her to this turning point of learning her place in this rapidly evolving world is great, but I wish it wasn’t so spoon fed in the delivery. The Legend of Korra has thus far had a reputation of trusting the audience to connect the dots in a number of places which is why directly drawing these connections for the audience via Toph seems a little uncharacteristic. It’s still better than most hand holding contemporary TV does, but a little bit surprising nonetheless.

Toph eventually takes Korra to the mystical banyan-grove tree. Taking a page from James Cameron’s Avatar, this banyan tree is connected to all life on the planet through its vast network. Toph claims Korra has been too disconnected from the world and her friends and family. Korra decides to trust toph and begins to mediate in the tree’s network. After crashing into the swamp mere moments earlier, Jinora hears Korra’s spirit for the first time in years. Jinora and clan find Korra!

Before the group departs from the swamp, Korra decides that it is finally time to remove the last bits of the metal from her body so that she can get back in Kuvira fighting shape. Korra begins to focus and then bit by bit, removes the last of Zaheer’s deadly metal from her body. After a brief celebration she packs up and leaves the swamp with Jinora, Ikki, and Meelo. Before leaving , she offer to bring Toph back with her, but in true Yoda fashion, Toph decides to she’d rather live out her days alone in solitude.

The Calling is a fun little episode even if it doesn’t exactly advance the overarching storyline much. The airbender storyline definitely feels less necessary seeing as almost every scene ends on a punchline without really giving any of the characters much development. It’s definitely interesting to see how the family dynamics play out, but hardly something necessary in the final stretch of the show. Korra’s swamp training with Toph has also been a great deal of fun, but the show is leaning a little too hard on fan service and Last Airbender callbacks. I’ve got no problem with easter eggs and nods, but having Toph reference old episodes several times does feel like a little much. Then again…I’m a massive Airbender fan.

This was an episode light on plot and game changing developments and probably the weakest episode of the season so far. It’s not bad and is still more entertaining than any other half hour show on TV, but doesn’t quite hit the Korra standard of quality we’ve come to expect. The hints of an invasion at Zaofu are exciting and enough to keep the B plotline of the week relevant. I don’t think it’s a coincidence that the weakest episode so far also lacks the most interesting thing about Book 4 so far….Kuvira.