When I think of Birdman I think of Winston Churchill’s famous quote on Russia. “It is a riddle, wrapped in a mystery, inside an enigma”. Birdman is about so many things, but the film itself claims to be about nothing. It’s about a washed up egotistical actor searching for relevance in world of viral media; it’s about the overindulgent and self important American entertainment industry; it’s Michael Keaton acting through a memoir reflecting on his own career. This isn’t just a satire, it’s a complex piece of pulpy literature as written by the mind of a self loathing auteur. What is Birdman? It’s the most conspicuously uncanny film to hit theaters this year and it’s unlike anything you’ve ever seen.

Birdman follows former superhero movie star Riggan Thomson(Michael Keaton) who is attempting to make a come back with an adaption of the stage play What We Talk About When We Talk About Love in New York. His agent Jake(Zach Galifianakis) is totally focused on keeping the production together while his daughter Sam(Emma Stone) works behind the scenes to keep her Dad from going totally off the deep end. Riggan stars, writes, and directs the play with a cast made up by his girlfriend Laura(Andrea Riseborough), first time Broadway star Lesley(Naomi Watts), and theater critical darling Mike(Edward Norton). As the play ramps up, it becomes increasingly clear this is a dramatic bunch of people who are being lead by a truly unstable and egotistical director who seeks love and relevance from the public. As the big premiere grows closer and closer, Riggan begins to tip toe the edge of his own sanity as he is forced to confront his failures as an actor, a father, and human being.

Riggan is the anchor and it’s no coincidence Michael Keaton is cast as this former superstar who is seeking to adapt to the changing world of entertainment. His place in the lead all but reveals writer/director Alejandro González Iñárritu‘s intention to satirize the current state of Hollywood and American entertainment. This movie is out to criticize just about everyone involved in the the process from the actors all the way down to critics and even audiences. It works as a love/hate letter coming from the mind of a dedicated artist who has grown so familiar with the industry and how it all works that he loves and despises the deep intricacies of the often silly and toxic climate surrounding Hollywood.

But what really makes Birdman exciting is that it’s not just about any one thing. It explores the idea of humanity’s place in the universe and how insignificant ego and our beloved entertainment industry is in the grand scheme of history. Riggan’s broken career ties deeply to his regrets as a father and family which adds an entirely new layer to this mentally fractured ex-superstar.

Birdman is smart, layered, and emotionally charged, but make no mistake; it’s also one of the funniest movies of the year. Yes, it’s asking all of these big questions and forcing all of us who love to participate in the American entertainment industry to take a hard look at how ridiculous we all are. But it does so by delivering one unbelievable scenario or pop culture reference after another. When the movie isn’t using names like Robert Downey Jr. or Martin Scorsese to invoke ideas of success, it’s taking Mike’s caricatured actor to new levels of self obsession. Each character in the piece has a role to play in the larger conversation this film is having with modern Hollywood and Edward Norton’s turn as the over indulgent actor is without a doubt one of the quirkiest characters I’ve seen all year. Another one of the funnier elements of the film is the use of Riggan’s inner Birdman voice(clearly modeled after Christian Bales indistinguishable Batman voice) which pits reality against his own inner super ego.

As if Birdman didn’t sound wonky enough already, the film is actually technically impressive with its especially breathtaking camera work. In the entirety of the this film’s two hour run time, I only counted three total cuts. Other than a couple of bookended scenes in the beginning and the end, this film never breaks fluidity between takes. The entire movie is presented as one single two hour take and the transitions are seamlessly weaved into the edits. This draws you into the experience and brings a sense of connectivity to the tale that a more traditional style simply can’t capture.

Birdman is a fairly simple story layered in style, any number of themes, and self depreciating satire. It’s one of the most unusual films I’ve ever seen and it begs to be watched again and again in order to fully realize each and every tidbit or easter egg. The execution here is nearly flawless as these actors, especially Michael Keaton deliver their best performances in years. This movie may spend it’s entire time tearing apart artists, critics, and Hollywood, but the truth of the film is so great you can’t help but love what it has to say(even if critics such as myself are declared totally cold, shallow, and worthless). Birdman is a must see for anyone who has any real relationship with the entertainment industry; whether it’s as a casual viewer,  an aspiring writer, or a participating filmmaker. If you’re looking for something smart, unusual, and contemplative,  make it Birdman! 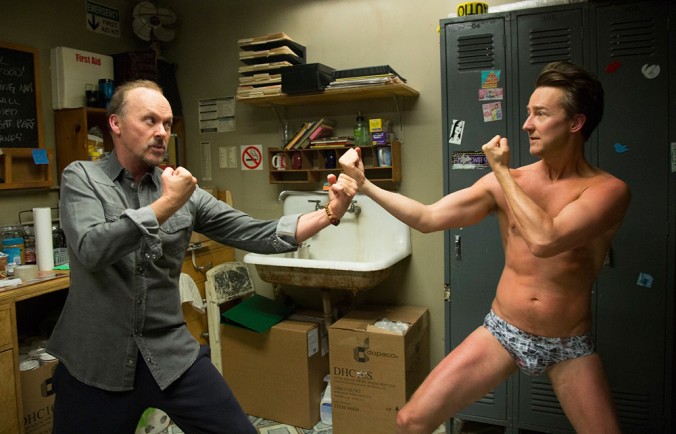 On the surface, Birdman is a pretty straightforward story, but the movie is layered with self depreciating meta-humor, themes of ego vs reality, and straight up criticism of the state of the entertainment industry. It works on a number of levels but never forgets the heart of the story in its lead character Riggan Thomson.

Michael Keaton leads the pack as he plays a character whose journey parallels his own recent return to Hollywood. None of these characters reach the depths of Riggan, but each of them fill a very unique and fun filled place in the production of the film. Even though not every character’s motivations are completely clear, their actions are meant to reveal a different facet of the increasingly ridiculous entertainment industry. Edward Norton is notably entertaining as an overly self indulgent actor who only ever finds himself on the stage.

This film is presented as one two hour long take and it never once flinches. The transitions are seamless and the use of CGI fits in without a hitch. Writer / Director Alejandro González Iñárritu makes something really special this very honest love/hate letter about the very industry that has built his career.

Overall Effectiveness of the Film: 10

This isn’t necessarily a flawless film, but I’ve been hard pressed to think of anything out there like it. It has so much to say but never loses its edge as satire. It’s a full meal of ideals you’ll be digesting for days and it’s sure to be one of 2014s most unique films.