After seven years away from the big screen, the Saw franchise has finally made a return. In the world of studio filmmaking, the runaway success of the annual franchise year after year made a revival inevitable. Heading into the movie, my two main questions were,”can fresh talent take a look at the exhausted premise to give us something surprising?” and “Can this film be smart and self-aware enough to justify its own existence?”

With the series happily resting in its place among iconic horror, why bother bringing it back now? A little history lesson: this new entry, Jigsaw, was kicked into gear when writers Pete Goldfinger and Josh Stolberg (Pirahanna 3D, Sorority Row) pitched their vision for “Saw in 2017″ to Lionsgate. Once the studio was on board, directors Michael and Peter Spierig (the surprisingly exceptional Predestination, Daybreakers) were recruited to direct, and the whole production was off to the races. With that sort of story, you’d think Goldfinger and Stolberg must have had an interesting pitch, right?

Hardly. The film still hits all of the beats fans know all too well. It starts 10 years after the death of the Jigsaw killer AKA John Kramer (Tobin Bell) when a man claims to have activated a Jigsaw trap. Not long after, a body marked with Jigsaw’s signature missing puzzle piece appears. As the case unfolds, a group of seemingly disconnected people wakes up at the beginning of a Jigsaw games. As the victims make their way through the trials, the police investigation of the resurgence of the traps begins to close in on the truth.

This all probably sounds familiar, but surely there’s a curveball or a new take along the way to shake things up, right? The twist: there’s nothing new to see here. Jigsaw never does much to derail the template established in the previous films. Everything in this movie has been done before and done better in another entry. A game of cat and mouse? Check. A group of despicable people learning about their obscure and oddly specific connections to the tragedy of John Kramer? Check. *Spoilers* Using the audience’s perception of time as the key to the twist? Check. Use a secret apprentice disguised as Jigsaw as the film’s antagonist? Check. *End of spoilers*

It appears that after seven years away, the best story Pete Goldfinger and Josh Stolberg could conceive was an especially weak run-of-the-mill Saw movie. This Saw flick aims at fans who came for the gory traps and are less interested in the critique of the systems driving Jigsaw and his victims to commit heinous acts in the first place. This plays less like a proper sequel and more like a made-for-TV knockoff Saw movie that debuted on Syfy circa October 2012.

Perhaps the most frustrating thing about Jigsaw is its lack of self-awareness. The movie plants a red herring halfway through that offers a glimpse at a much smarter, more interesting movie about the problems and potential dangers of fan culture that have grown even more prevalent since the Saw: The Final Chapter in 2010. By not following through with the red herring, the subtext of this film unintentionally says things about fan culture and lega-sequels (legacy sequels) that are almost insulting to fans and filmmakers alike. I’ll dive further into this idea in my spoiler-filled analysis.

The answer to both of my main questions about the return of the franchise was a resounding “No!” Jigsaw did not look at other smart and successful franchise resurrections such as Scream 4, Bride of Chucky or even a drama like Creed, for inspiration. What we have here, is nothing but a quick cash grab that unwittingly says discouraging things about fans and fan culture. Instead of revisiting the Saw series or watching Jigsaw this Halloween, take a look at other horror films that have successfully reinvented their premise. For more of my thoughts on the film, check out my spoiler-filled post below.

RECOMMENDATION: PASS, even for fans.

Read my spoiler-filled analysis below 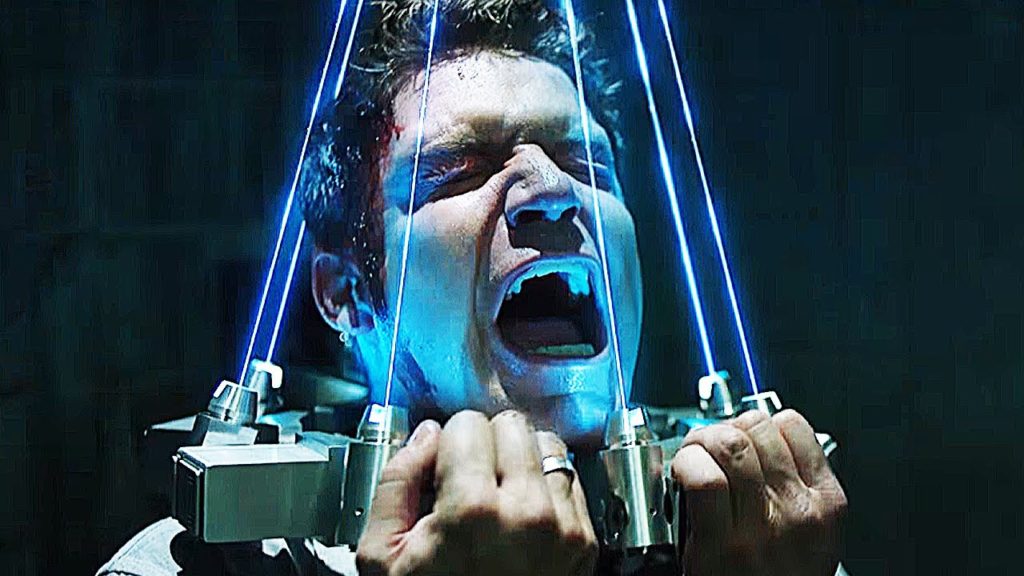 Jigsaw is a movie from fans who missed the point

There’s no denying how burned out the Saw franchise was when it finally came to its “Final” Chapter in 2010. The formula was tired and the logical next steps of the story had been completely exhausted. Admittedly, I was more or less a fan of what the older films were doing. They evolved from a psychological thriller in the first film to a gore-tastic soap opera by the fourth and fifth entries. When the series finally wrapped with the massively underwhelming seventh entry, I was just as ready as anyone to put the series to rest.

So why was I so eager to give this film a chance? After taking a seven-year break and bringing on a new creative team, I had hoped this film could have put a clever twist on the existing formula. We all know this can be done because other horror franchises have successfully done it before.

Bringing a franchise back from the grave may not be easy, but if it must be done, the people working behind the camera need to have something new or interesting to say about what came before.

In 2011, The Scream franchise was resurrected and actually put a brilliant spin on the series’ existing metacommentary by presenting the horror genre in a light that did not exist when the third film was released in 2000. Horror and its role in society had evolved and Wes Craven wanted to explore how. In 1998, Bride of Chucky was released seven years after the release of Child’s Play 3 as a horror-comedy that poked fun at and subverted the tropes of the first three films. The last example(not a horror), Creed, was released in 2015, nine years after Rocky Balboa. It put a fresh spin on the original’s plot beats by making the main character an African American who trained under the original star. Bringing a franchise back from the grave may not be easy, but if it must be done, the people working behind the camera need to have something new or interesting to say about what came before.

The only thing fresh Jigsaw brings to the table is the Jigsaw fangirl, Elanore Bonneville(Hannah Emily Anderson).  Elanore is a lab assistant who secretly collects Jigsaw traps and spends her free time frequenting a Jigsaw Killer fan website. She’s obsessed with John Kramer’s philosophy on life and has studied his methods along with others on the internet. When given the opportunity to visit what she believes to be a live game with real people’s lives at stake, she’s anxious to watch and see how his traps play out in real time. Had this film been framed differently, she could have been used as a surrogate character for the fans who turned out on opening day. By making Elanore the main character, the film could have further explored the potential dangers and issues arising in fan culture, especially as it relates to true crime and serial killers.

We’re living in what could be called a renaissance of true crime stories in media. Since Serial debuted in 2014, a plethora of podcasts including the hit My Favorite Murderer have cropped up. Television like Mindhunter and films such as Black Mass have also gained a notable amount of traction. These stories often painting the criminal or murderer in a more sympathetic light have built entire online fan communities around the subject’s life and methods. Why do fans like myself keep returning to this franchise that tortures people in a brutal and disgusting manner? I would have loved to have seen Jigsaw take the film in that meta direction. Instead of chasing that idea to potentially insightful ends, Jigsaw uses Elanore as a red herring. What’s most ironic is how the filmmakers themselves seem to be fans of the Saw films’ methods, but not the underlying ideas driving the story of the older films.

Jigsaw cashes in on the traps, gore and plot mechanics of the older movies, but overlooks the entire reason those tropes were initiated in the first place. Each of the Saw films was critiquing a different aspect of society that drove Jigsaw to start playing games in the first place. The series tackled corruption in law enforcement, the drug epidemic plaguing underclass citizens and a rigged healthcare system. I can’t say the new film is poking at any specific issues as much as it’s just putting people through traps for the sake of low substance visceral thrills.

This begs the question. Are writers Pete Goldfinger and Josh Stolberg just fans like Jigsaw‘s Elanore who don’t understand the ideas behind the methodology of the older films? Or did they just make this movie pandering to the series’s most surface level attributes as a quick cash grab and a bullet point on their resume?  A yes to either of those questions assumes Saw fans will accept whatever torture-porn is thrown in front of them which is disappointing and a disservice to viewers looking for something more meaningful in their Halloween season horror films. This poor execution is just another failure suggesting that handing the keys of the kingdom to fans for new stories is not always the best idea.