It seems like it’s been moment since Mother Nature was the big bad in pop culture. The 90s was littered with man vs nature stories with box office hits like Dante’s Peak, Twister, and Armageddon but the genre has been barren ever since.  After years of being on the backburner, Universal is hoping to give the popcorn pleaser a shot to arm with another retelling of the 1996 tragedy on Mount Everest. They are joined by a slew of acclaimed actors and 2 Guns  director Baltasar Kormákur. Does Everest bring us an intensive look at the dark side of mountain climbing, or has this story already been mined to the fullest? 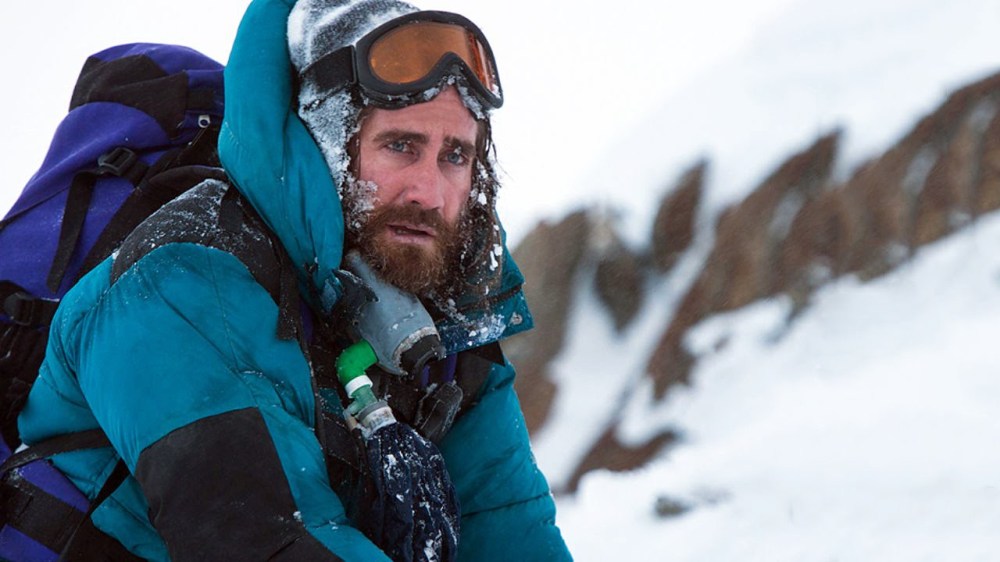 Everest follows two different hiking expeditions, “The Adventure Consultants” and “Mountain Madness” in May 1996 as they prepare to make the trek up the titular trial. The Adventure Consultants led by Rob Hall(Jason Clarke) includes Beck Weathers(Josh Brolin), Doug Hansen(John Hawkes), and Yasuko Namba(Naoko Mori). After running into a few delays, Rob meets with the lead of Mountain Madness Scott Fisher(Jake Gyllenhaal) to strike an alliance so that both teams can reach the summit before a deadly storm sweeps the mountain. After reaching the summit, the team gets divided just before the weather overtakes the mountain and all hell breaks loose.

This film is a stunning piece spectacle with undeniably beautiful cinematography showcasing the mountain in all of its horror and glory. There’s not a single shot of this movie lacking in the art department with even character close-ups framed to capture the ominous undercurrent of the mountain. This movie makes for a better experience than it does a movie which means catching this on the biggest screen possible is an absolute must. If you’re not going to go big with Everest, then I highly suggest you go home.

Despite having all of the acting talent and production value of the very best Oscar contenders, Everest falls completely flat in the storytelling department with pacing being an absolute nightmare with curious characters  put on the back burner with little to no development. Had this movie not had the budget of a blockbuster, this would have been on par with the most mediocre of TV movies. Luckily, just about every actor brings their A-game with Gyllenhaal, Clarke, Hawkes, Sam Worthington, and Brolin bringing a notable weight to their painfully underdeveloped roles. These guys may not have much to work with, but they play to their strengths as character actors and bring just enough pathos to connect with the audience in a meaningful way.

What’s most disappointing about the character writing is the wasted potential. These characters are all intriguing at face value and the movie almost goes out of its way to gloss over what makes these people crazy enough to take on one of nature’s most difficult challenges. Several of these people are given one or two scenes to set up some sort of emotional/spiritual arc, but the movie sidelines the seeds planted in the first half of the film in favor of shock value in the final stretch. With so much talent involved, this really feels like a missed opportunity to bring a new dimension to a genre that generally lacks real depth.

The pacing in this movie is equally messy with an extensive amount of exposition, a sublimely brief climax, and then forty five minutes of drawn out conclusion. The narrative is almost too slavish to the documented events which might be a point of interest for people looking at the history itself. It may be treat for history buffs, but the delivery hardly makes for the most exciting theater going experience.

Everest isn’t a total disaster, but perhaps it should have been . Seeing an all star cast getting iced by a mountain in a slightly comedic fashion might have made for a more  engaging experience. As it is, this movie is just another cool IMAX demo with occasional moments of heavy handed emotional manipulation. Thanks to its outstanding cast and Oscar quality visuals, Everest isn’t a total waste of time, but it’s hardly worth your time if you aren’t seeing it on the biggest screen you can find.