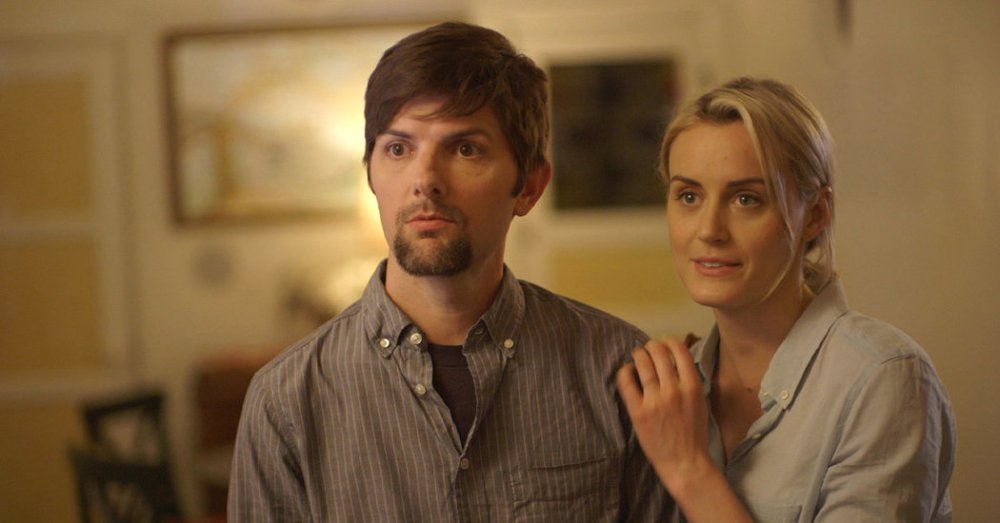 The deadCenter Film Festival continues to deliver a wide variety of local and high profile projects, but few films playing this week have had talent as famous as The Overnight‘s Adam Scott (Parks and Recreation), Taylor Schilling(Orange is the New Black), Jason Schwartzman(Scott Pilgrim vs the World), and Judith Godrèche(Stoker). This is definitely an A-list team of comedic masterminds, but does the single location material give them enough groundwork to work with?

Alex(Scott), Emily(Schilling), and their son RJ are new to Los Angeles and eager to make new friends. In attempt to meet new people, Alex takes his son to a birthday party where he befriends one of the kids, Max. Max’s father Kurt(Schwarzman) gets very excited and invites Alex and his family over for a dinner party. After meeting Charlotte(Godreche) the two families sit down for dinner and everything seems to go off without a hitch until Kurt puts the boys to bed and the truth behind the inexplicably friendly couple begins to come out.

The entire movie stays put in one house which makes for an exciting challenge for writer/director Patrick Brice. He introduces the couple as a wealthy and affluent duo, but leaves just enough uneasiness to keep the audience hungry for more. It’s a premise could have just as easily been the set up for a great horror movie, but luckily this couple borrows less from Psycho and more Will and Grace. The slow burn pacing of the quirky turned queerish marriage is masterful. The further down the rabbit hole the audience goes the louder the laughter grows in order to help ease the painfully uncomfortable nature of each and every secret exploit the duo has dabbled with.

The script is strong with this one as Brice manages to hit a particularly seductive cadence with in the pacing for each and every revelation. These absurdity of the surprises surrounding Charlotte and Kurt’s relationship are more obscene than the one before it, but none of the so called “skeletons” in the closet ever feels totally out of the realm of possibility. Everything from Kurt’s obsession with painting anuses to Alex’s complex about the size of his own manhood make for some serious laughs despite often feeling grossly uncomfortable.

Given the single location, this is hardly a plot driven movie. The finer work rests with these characters as they wrestle with their insecurities and uncertainty in the roles of their own marriages. It may be a comedy, but there’s actually a fair amount of growth for everyone involved. Each one of their interactions in the film act as a therapy session that peels back the the emotional layers of each character. It may all end in what feels like a totally pointless orgy, but these people don’t wind up in the same emotional place they started in. The bookended scenes with each of the couples playing together in the park acts as the perfect reminder highlighting just how much each of these people have changed by the end of the film.

Patrick Bice has an undoubtably unique voice and style that’s somewhere between the raunchiness of Adam Hertz’s American Pie and Richard Linklater’s Dazed and Confused. It’s very dry conversational style laced with not so subtle cracks at sex positions, pretentious artist, and just about everything that makes the world go round. It’s a unique voice that delivered something we haven’t seen much in the realm of popular comedy in the last ten years.

For all of its artistic success, The Overnight is going to be remembered as an impressively quirky indie comedy. It’s a little too uncomfortable for mainstream adult audiences, especially given the unashamed use of male nudity in the latter half of the movie, but if you’ve got sensibilities of steel there’s plenty to enjoy with this unadulterated exploration of marriage. For everyone else The Overnight is going to be a curious but necessary pass on the rental shelf.

The original post can be found at Renegade Cinema