We’ve finally made it to the fall family season at the movies and Disney is at it again with Alexander and the Terrible, Horrible, No Good, Very Bad Day, an adaption of the modern classic storybook by Judith Viorst. I have fond memories of reading the book when I was a wee little reader, but never in a million years did I expect to see any version of this story adapted to the big screen. We’re living in the era of Hollywood where any brand no matter how obscure is better than no brand at all as Disney leads the charge of adapting children’s literature for modern audiences. Alex’s bad day may seem like an oddly basic premise, but does director Miguel Arteta and writer Rob Lieber turn this little book into a good bit of family fun? 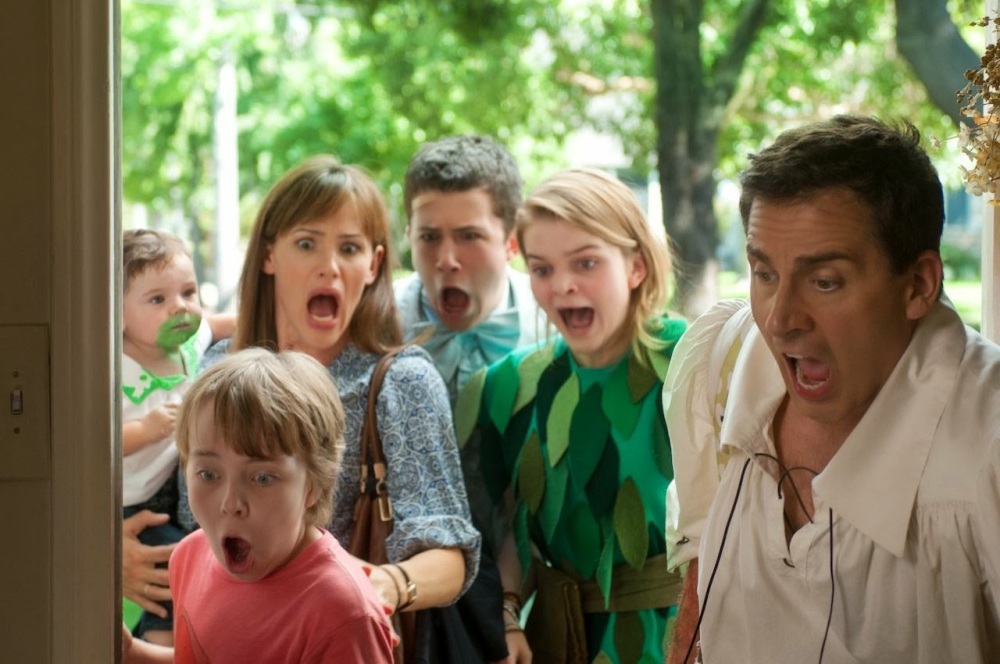 Alexander Cooper(Ed Oxenbould) is always having a bad day. He wakes up to a late alarm, gets gum stuck in his hair, and just can’t catch a break with his first crush. Even though Alex can’t ever get a break on his big day, his Dad(Steve Carell) lands a huge interview, his Mom(Jennifer Garner) is about to get promoted, his brother(Dylan Minnette) is about to land his drivers license and get crowned prom king, and his sister(Kerris Dorsey) is about to star in the school play as Peter Pan. Everyone gets so excited that they don’t seem to care much for Alex’s problems. On the eve of his birthday, Alex blows out a birthday candle to the wish that one day his family would understand what it’s like to have a terrible, horrible, not good, very bad day. When the next morning arrives and the Cooper’s have all overslept, Alex realizes this is not going to be a day like any other in the Cooper household.

Alexander and the Terrible, Horrible, No Good, Very Bad Day is striving to be the quintessential day gone wry/ Murphy’s Law of family comedies. We’ve seen it done time and time again with a number of family flicks, but this movie tries to set itself apart by modeling it’s plot after mainstream adult hits like The Hangover instead of the more typical family fare Disney has been churning out in the recent years. It throws all sorts of punchlines at the wall and like The Hangover, the results range from hilarious to disastrous. Your enjoyment of each family member’s storyline is going to be dependent on what type of humor you really appreciate. For instance, Garner’s storyline as a book publisher featuring Dick Van Dyke lands some really great wit while Carell’s storyline relies more on his typical mix of deadpan/slapstick humor. It’s a neat little experiment that leads to some fun but really uneven results.

Even though it gets to experiment with differing brands of humor, it still includes pretty much every cliche in the book. Alex mistakes his brother’s phone conversation. Check. Something catches on fire and everyone blames Alex. Check. Steve Carell starts yelling in a crazy awkward moment. Check. The movie hits all the notes you’d expect it would by stealing some of the best moments from any number of family flicks from the last 20 years. For every moment that you laugh at something clever, there are at least three moments of “been there, done that” deja-vu. Dick Van Dyke pops up for one the film’s best jokes and Alex’s brother gets a couple of priceless punchlines, but the great just doesn’t outweigh the average.

Alex gets some points for creativity, but like many of the biggest studio family flicks, the film ends with a not-so- subtle message you saw coming from the moment you glanced at the poster. Telegraphed messages in movies like these are pretty common, but this film  spells out for you in giant capital letters. It’s the name of the game with these stories, but I’d hope there’d be enough open endedness for parents to actually talk to their kids about the message when it’s all over instead of having Ed Oxenbould lazily recite the moral of the story. It’s frustrating, but luckily this eye rolling deux ex machina filled finale delivers some pretty fun Australian cowboy stripper action that you never saw coming.

Alexander and the Terrible, Horrible, No Good, Very Bad Day is pretty standard family fair with a few really smart and creative stylistic flourishes. It’s certainly not the Hangover of family movies it’s striving to be, but Miguel Arteta’s light experimentation makes for a number of laugh out loud moments the whole family will undoubtably enjoy. If you’re kids have been begging you for a trip to the movies and they just can’t wait another week, this is passable if mostly forgettable family entertainment with just enough chuckles to pass the brief 81 minute runtime.

The plot structure is in line with the likes of The Hangover, but the execution is more in the leagues of Parent Trap  or Are we There Yet? It’s not wholly original and it concludes with “hit you over the head” moral of the story and some eye rolling deux ex machina. But hey, there’s Australian cowboy strippers.

Most of these actors are cast based on type so it really feels like most of them are going through the motions. Carell is reliable and it’s good to see Jennifer Garner in something. Dylan Minnette was especially enjoyable, but none of these actors really did anything especially original or amusing.

The movie is pretty standard Disney family fare, but does offer some cool creativity by bringing different brands of humor to each characters plot line. The movie checks all the boxes and delivers a number of predictable cliches, but there’s enough here to land a chuckle or three.

Overall Effectiveness of the Film: 5.0

Alexander and the Terrible Horrible, No Good, Very Bad Day turns out to be a pretty average family flick that will hold your attention and might even get some laughs, but will be ultimately forgettable. The kids will probably love it, but I can’t imagine it’s one they’ll want to see again and again.