“You don’t turn your back on family, even when they do”
-Dom Toretto

The Fast and Furious series has gone from a franchise about beautiful women, fast cars, and crosstown rivalries to one of  heist jobs, an ever growing ensemble cast, and over-the-top stunts. Nobody ever could have predicted back in 2001 that the brand would go on to be one of Universal’s biggest ever with these characters traveling all over the world doing job after job in some of the most ridiculous and shocking ways imaginable. Now that Fast 5 has reinvented the story of Brian O’ Connor and Dom Toretto by fulfilling their “one last job” shtick with one of the most thrilling heist jobs to grace the big screen, where does the story go from here?

Furious 6(as the title screen so graciously tells us) brings us once again to Dom Toretto(Vin Diesel) many months after he has settled down with his girlfriend and all the money he heisted in the last film. After an incident in Russia, Dom is approached by none other than Luke Hobbs(Dwayne Johnson) who claims he needs Dom and the team to take down a team of international terrorists who use lethal “vehicles” as their weapons. To ensure Dom’s help, Hobbs brings pictures of Letty(Michelle Rodriguez) who apparently survived the events of Fast and Furious, to coerce him into taking the job. It takes Dom no time to call up his crew from around the world which this time includes Brian(Paul Walker), Roman(Tyrese Gibson), Tej(Ludacris), Han(Sung Kang), and Gisele(Gal Gadot). The deal is that if they complete the job, they get full amnesty for their past crimes so that they can return home to LA. Once the band is back together, they are introduced to this movie’s “super-villain” Shaw(Luke Evans) in a spectacular race through the streets of England that ends with The Rock’s more than impressive jumping skills. The gang quickly figures out that they may be in over their heads with Letty’s alliance with Shaw only complicating matters even further.

This series continues to surprise with it’s attention to its characters and subplots that carry movie to movie that have now formed a sort of mythology(who knew a series about cars could have a history/mythology?). At this point, we all know that the scenarios presented on the screen are absolutely insane and completely unbelievable, but somehow it’s these characters and their interactions that keep this series grounded. The chemistry between any two of the characters is great and makes this more than just a thrill ride to watch. Does the movie have plot holes big enough for to drive a tank through? Yes! The story is full of annoying little plot conveniences and poorly conceived explanations, but the tale stayed engaging enough to hold my attention away from these flaws at least in the moment. In a popcorn action movie like this, what more can you ask of it?

Unlike many franchises that make it to number six(Friday the Thirteenth, Nightmare on Elm Street), the producers of The Fast and the Furious series really seem to care about the canon that has been established in past entries, and it is especially notable in this movie which pulls plot threads/characters from at least three other movies. Having seen all of the films, I found myself really enjoying the little nods and throwbacks put into play as it gives the story more depth to appreciate than what one would expect from this type of movie. These Easter eggs shouldn’t alienate newcomers who will definitely enjoy Furious 6 for its nonstop; high octane action, but for viewers who have followed this series for the last twelve years there is plenty more to appreciate.

With Fast Five pulling off the heist job to end all heist jobs, the only thing Furious Six could really do is amp up all of the stunts and set pieces. This leads to a movie that is loud, ridiculous, and full of of lightning fast energy. If you thought Fast Five was pushing the suspension of belief to the extreme, prepare to be blown away by just how relentlessly Furious Six shatters through the glass ceiling of plausibility. It seems that stunts with just cars are not enough as this movie brings in tanks, fully weaponized vehicles, and at one point even features the crew playing Ahab with a cargo airplane. The skies the limits with this type of action, and for some this type of insanity may be just as fun, but I found that at a point it just became too far-fetched. There comes a point where all of the explosions and completely impossible feats take away from the tension created when you believe your characters are in danger, and Furious Six comes dangerously close to racing over that line.

The car stunts are all good and fun, but the moments where this movie truly shines is in its good old fashioned fist to fist fight scenes. The movie brings in MMA fighter turned movie star Gina Carano as Hobbs’s right hand woman who brings her A-game in at least three fight scenes worth noting. Dwayne Johnson(who is getting more ripped with each passing movie) also gets an impressive fight scene with a character that is somehow even bigger than he is.

This is director Justin Lin‘s fourth and final time with the Fast and Furious gang, and by this point he has the character dynamics, visual style, and impressive action sequences down to an art form. His style which has consistently improved with each passing movie has always had a fresh feel even when the actors were struggling (eyes on Paul Walker)or the scripts were stale. Fast Five was probably the better movie to exit on, but his direction remains top notch throughout this film despite the logic defying action.

Furious Six is the stuff summer blockbusters are made of. It has a great cast of enjoyable characters, a story that seems deliberate despite its stupidity, and adrenaline pumping action set pieces that will leave you in awe(for better or worse). While I believe that Fast Five is still the strongest the series has to offer, Furious Six offers a more than worthy follow-up despite its occasional mistake of over-stepping the laws of imaginary physics from time to time. This is a piece of dumb summer fun that you don’t want to miss, and for fans and newcomers of the series this movie is an absolute must in the theater. This franchise is already set to release another film next summer, and while the prospect continues to seem exciting, lets hope that it’s the seventh film that drives a grand finale through to the finish line before this tank hits empty. 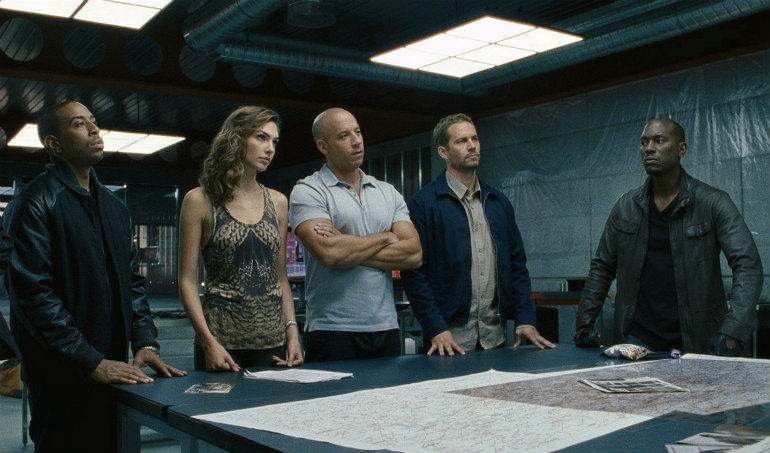 As far as summer action movies go, the story is more than serviceable. It definitely lacks the freshness of the previous entry, but still maintains the overly ridiculous and high energy tone that has made the franchise fun. The nods to past films in the series is fan service that actually gives the film more depth than you would expect. This is not a “good” story, but rather one that engages and entertains.

All of the returners are still a blast to watch and newcomer Shaw is fitting if a bit forgettable. This series isn’t banking on particularly deep or provoking characters, but is instead trying to make them memorable and exciting to which they succeed.

On one hand, the series has never looked better with Justin Lin bringing some of the cleanest fight scenes and stunts I’ve seen in recent memory, but on the other hand the action just gets so unbelievable that it took me out of the movie more than once. The over the top laws of gravity that have already been established mean nothing here and the movie fails to be consistent even in its absurd nature.

This movie is a load of fun in every category. It lacks the fresh zest of the fifth movie, but still delivers a more than satisfying summer popcorn flick. The action gets a bit too fantastical by the end, but even those moments of disbelief aren’t enough to keep this from being a great deal of fun.

*Make sure not to miss the mid-credits scene. It sets up the villain for the next film, and its someone you won’t want to miss!