1939’s The Wizard of Oz is an absolute classic that has captivated generations of audiences by taking all of us to a world filled with magic, excitement, and self discovery. Oz the Great and Powerful  seeks to recapture the magic that has enchanted movie goers for decades by re-introducing us to a younger, egotistical, and more ambitious man that would eventually go on to become the wonderful Wizard of Oz. Director Sam Raimi (Spiderman Trilogy, Evil Dead) must face the daunting challenge of writing a prequel to a beloved classic while also creating something inspired enough to work on its own right.  Can Oz the Great and Powerful be nostalgic and innovative at the same time or is this a rehash that is doomed to live in the shadow of original? 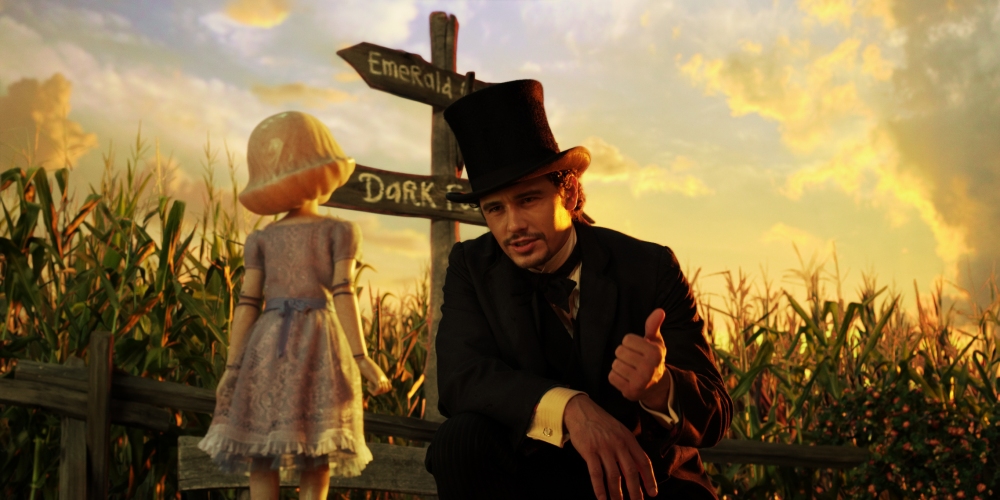 Oz the Great and Powerful starts its tale in the familiar black and white state of Kansas where Oscar Diggs AKA Oz(James Franco) is a stage magician for the Baum traveling circus. After a disastrous show and an incident with the circus’s strongman, Diggs decides to flee by stealing a hot air balloon. While flying away he is caught in monstrous tornado and is teleported to the vibrant and beautiful land of Oz. Not long after arriving, Diggs is discovered by Theodora(Mila Kunis) who tells of a prophecy that point’s to Oscar’s greatness as the future ruler of Oz. Seeing this as an opportunity, he takes the guise of the king of Oz  and seeks to cash in on his predestined fame. On his journey to claim the crown, Oz befriends a flying monkey named Finley(voiced by Zach Braff) and China Girl( voiced by Joey King) and eventually meets two other witches, Evanora(Rachel Weisz) and Glinda(Michelle Wiliams). As he and his companions explore the land, they learn that evil is lying below the surface and not everything is as it seems with a wicked witch lurking in the shadows.

The movie is anchored by the conceited and egotistical Oz who is an anti-hero of sorts as he essentially aims to con his way into ruling the kingdom through charm and parlor tricks. Franco plays him well by giving the character enough charisma to be a believably likable liar while also showing the shades of heroism he hides for most of the movie. The ambiguity of Oz and his actions may be the most fascinating part of the movie as there are many times where his mistakes end up doing more damage to the already fragile kingdom. The movie takes a very interesting angle and explores the idea that maybe his deceptions lead to the tragedy of the Witch of the West which left me wondering if the land of Oz would have been safer if he’d never crashed there.

The story of the movie has a nostalgic tone that has a fresh taste of adventure that has been lacking from the epic fantasies in recent years. There’s a real sense of excitement and wonder to the land of Oz in the beginning of the movie that loses its steam in the second half of the film which is focused more on an epic battle. I found the first half of the movie to be far more exciting as I was swept away by the spectacular 3D visuals and the keen discoveries that Oz observed when he first arrived. About midway through the movie, there’s a major reveal that dramatically alters the adventurous tone in exchange for a more typical action epic. While I found the final act of the film to be full of laughs and thrills, I never thought the movie recaptured the magic and awe established when Oz landed his balloon.

Sam Raimi’s cheeseball style is a much better fit for the land of Oz than I could have ever expected. His campy direction is a really great complement to the dramatic, but fun filled fantasy on display. The movie never loses emotional impact, but is still  filled with quirky jokes and plenty of smirk one liners. Raimi continues to show that he understands the massive audience he is trying to hit as the movie has plenty of call backs and nostalgic moments for older fans along with silly gags and more animated characters for kids. There really is plenty of fun to be had for the whole family  because of the playful style, accessible characters, and exciting story that I think will be engaging for all ages.

While the movie sails high overall, it falters in its details. The biggest of these details has to be The Wicked Witch of the West who shows up in the latter half of the movie. While her character is well written, her portrayal is less than satisfying. The make-up looked incredibly sub-par and even a out of place. You mix the poor make-up with some odd choices with her voice and you have a character portrayal that simply misses the mark. If you were looking for a newly iconic version of the character you’re better off turning on the musical.

Oz the Great and Powerful easily beats its competition for the year’s best fantasy so far and even sets a fairly high bar for others to aim for. It might not be a modern classic or even the most innovative take on Oz (see Wicked), but it definitely recreates the same magnificent feeling of wonder and inspiring awe that I’m sure audiences felt when Dorothy landed in Oz back in 1939. If you’re a fan of fantasy, wanting to take your family to the movies, or just looking for something to catch in theaters to get you by until summer; sail no further in your hot air balloon than Oz the Great and Powerful.

Oz the Great and Powerful features a familiar story that has exploration, adventure, and even a giant battle. It may not be a classic or something groundbreaking, but it is enjoyable nonetheless.

Oz makes for an interesting protagonist who is oddly unlikable and charming at the same time. While Franco generally plays up the sleazy side better, he also manages to give the character a softer side. The supporting cast/characters are serviceable enough save for the Wicked Witch of the West who seems almost too odd and out of place.

Sam Raimi’s campy direction and off beat sense of humor both add a great deal of self-indulgence that the film lavishes in. The movie is aware of its inherent silliness but is able to keep the fun without sabotaging the more dramatic moments of the movie. The visuals are all around fantastic with even the 3D adding to the experience.

Overall Effectiveness of the Movie: 7.5

This movie is part adventure, part fantasy epic and I much preferred the former with its keen sense of discovery. As an epic this may be one of the more fresh experiences I’ve had with a fantasy in a while at times even outdoing the likes of The Hobbit. The movie had some minor pacing problems and ultimately never did anything intuitive enough to make it a “great” or truly memorable film, but it is definitely a really good one that should keep most audiences engaged.