It’s almost Christmas time and with each new season comes its own slew of Christmas themed movies. Some years we’re treated to a retelling of the classics like A Christmas Carol, Elf, or Home Alone while other years we’re tortured by painfully awful cash-ins like Fred Claus and Deck the Halls. This year the Christmas movie season is kicked off with the Dreamworks animated Rise of the Guardians, a movie that not only touches on Christmas, but also covers other mythical holiday icons such as the Easter Bunny, the Tooth Fairy, and Jack Frost. Do we have a modern classic on our hands with Rise of the Guardians, or is this just another holiday flick going through the motions? 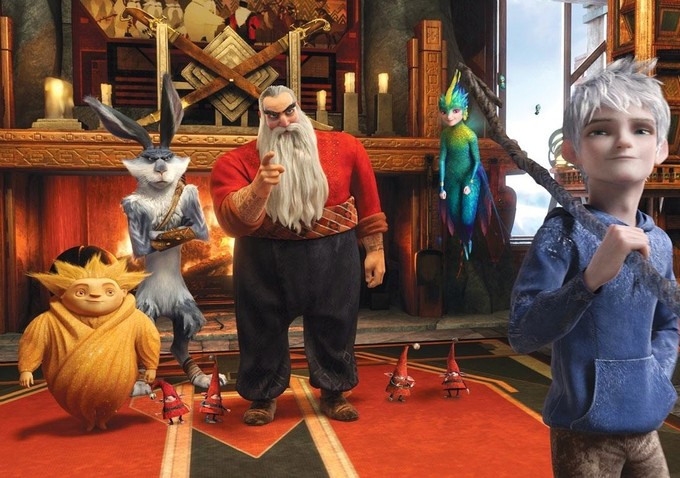 Rise of the Guardians centers on Jack Frost (voiced by Chris Pine) who is summoned to the North Pole by a team known as the Guardians. The team is led by Santa Claus AKA North (Alec Baldwin) with the Easter Bunny (Hugh Jackman), the Tooth Fairy (Isla Fisher), and the Sandman being the support. The team is brought together by a force they refer to as the man in the moon who put each of them in their place to protect the children of the world. The reason they bring Jack Frost into the mix is because the man in the moon seems to think that he is the only one who can help them defeat the Boogieman AKA Pitch (Jude Law) who is trying to vanquish hope from the world so that he can put the world back into a state of fear. Jack must find his way both on the team and in the world to muster the strength to save the children of the world and become a true Guardian.

The movie has a very cool and enjoyable story that is certainly effective when it needs to be. It may not have as much depth as other animated movies this year, but it definitely has a nice bit of charm mixed with a heart that looks to inspire hope to audiences this holiday season. At its core the story is both a coming of age story and a team-up flick. Jack Frost is the central character who spends most of the movie figuring out who he really is and why the man in the moon chose him. Jack’s story is heartfelt and certainly connected with myself and should for most audiences as all of us have had to grow up and struggle to find ourselves at one point or another.

While the movie does not focus specifically on one holiday, it certainly left a final note that is definitely just in time to get audiences young and old into the spirit of Christmas. The festivity is really nice, but ultimately the movie plays right into many of the clichés of other coming of age/team up movies (The Avengers being the most recent comparison). Intentional or not, this formula of the young outsider being just what the team needs to save the day has been done many times before. The basic plot of this movie is nothing new and in the end it holds very few real surprises.

The movie covers up the simple and predictable plot with a gimmick that pretty much everyone must have thought of during their childhood at some point.  What kid didn’t at one time think “what if Santa Clause and the Easter Bunny teamed up?” It may be a gimmick, but the movie makes sure to take full advantage of all of the awesome ideas surely spawned from those childhood conversations. Santa’s sleigh, the Easter Bunny’s boomerangs, and the Sandman’s lack of a voice all feed this very fun and childlike idea that makes the movie a real treat to watch.

What the movie lacks in creativity it makes up for in clever characterization. Each of the main characters is based on the myths we all know, but each of them is given a twist that brings them to life in a way we’ve never seen before. Santa Claus is the big lovable brute who may not be the smartest tool in the shed, the Easter Bunny is a cocky but tenderhearted fighter, and the Tooth Fairy is a workaholic that still manages to have a glowing personality. These witty and somewhat self-aware quirks are what give these characters the life that ultimately makes this movie something special.

The movie looks fine if not a bit unmemorable. On a technical level the movie is not exactly cutting edge, but it delivers an art direction that can be both dull and vivacious. The movie is most impressive when it is exploring the North Pole, the Easter Bunny’s hole, or the Tooth Fairy’s palace which all look fantastic. The movie does boast some of the best 3D I’ve seen this year because of the awesome use of snow effects that brings you one step closer to believing you really are in a winter wonderland.

Overall Rise of the Guardians is some great family entertainment that will get everyone pumped for the upcoming holiday season. The layout of the story may not be anything surprising or exceptional, but it is the way that these classic myths are re-imagined on a team together that pushes this movie into something more memorable than just a run of the mill Christmas movie.

This one is hard not to recommend to anyone taking their family to the theater this Thanksgiving. While it may never be a classic, it’s difficult to believe that there is a kid out there that wouldn’t love to see all of these iconic myths together in one movie saving the world one Easter egg or tooth at a time.

The story in this movie is not just a little familiar, it’s almost a plug and chug team-up/coming of age story. There are very few real surprises and things play out almost exactly as you would expect them to.

Perhaps the greatest strength of the movie is is very smart and creative characterizations of the mythical icons we’ve all heard about growing up. Each one of them is very distinct and memorable. The cast of this movie brings real charm with Hugh Jackman and Alec Baldwin being knockouts

The movie had a bit of a “meh direction. Everything worked together really well, but ultimately there really is nothing too memorable about this movie. Nothing really falls particularly short, but the movie doesn’t do anything particularly new or creative outside of the re-imagined characters

Overall Effectivenness of the Movie: 7.0

This movie will be very serviceable to families this holiday season, but unlike many of the best animated movies this movie does little to convince adults its worth a shot. There’s definitely fun to be had, but it doesn’t have the emotional core of a Pixar movie or the visuals or spectacle of the best Dreamworks or Disney movies. If you’ve got the right expectations this movie will satisfy, but don’t expect it to do anything to push any boundaries or create new depths.