*I’ll get this out of the way. I am not a fan of this series and I have not liked any of the movies thus far. While I thought that Eclipse was actually pretty solid from a production standpoint I simply cannot come around to the series because of the absurdly bad story, cardboard cutout characters, wooden acting, ect(the list goes on and on). This series is a phenomenon that I cannot wrap my mind around. Maybe it is because of my gender or maybe it is because I think that from a critical standpoint these movies are literary trash, but I simply cannot understand what it is that draws the audiences to like these movies. Therefore I accept that this final entry is not made for me, but is here to make some extra dough and round out the series for fans.

“Containing our secret has never been more imperative.”

The worldwide phenomenon among women comes to an end in Breaking Dawn Part 2. The conclusion to Stephanie Meyer’s Twilight Saga promises some much-needed payoff to the romances, subplots, and character arcs that have developed throughout the series. Does this series do anything different enough to draw non-fans and elevate the series or is this finale just a cash-in to please longtime fans? 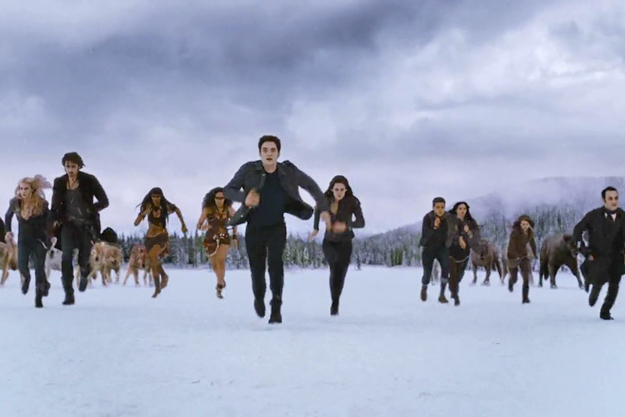 Breaking Dawn Part 2 starts where the last movie leaves off with Bella(Kristen Stewart) having to adapt to her new vampire abilities as well as become acquainted with her half vampire/human daughter Renessmee(no her name never sounds natural even after 2 movies). It does not take long before Edward Cullen(Robert Pattinson) and Bella realize that Jacob(Taylor Lautner) has imprinted their daughter and the issue is immediately(an a little too quickly) dealt with. After a few weeks of living in peace, another vampire, Irina, sees Renessmee and mistakes her for an immortal child( a sort of uncontrollable infant vampire). Irina immediately goes to the Volturi led by Aro(Michael Sheen) and misinforms him of the threat the Cullen child poses to the vampiric race. The Cullens find out that the Volturi are coming and attempt to gather as many allies as they can to stand by Renessmee. The Cullens scour the globe to find as many friends as they can as the Volturi march to destroy everything Bella knows and loves.

Whether or not you’ll appreciate this conclusion is going to depend a great deal on how much you have invested in the saga so far. The story does nothing to amend any of the flaws found in the series so far, but it also feeds very much into its audience expectations. In other words, this movie is not going to win any new followers, but it stands just as strong if not stronger than any of the other movies so far.

Perhaps the most damaging part of the plot in the movie is the climax of the film. In many ways, the saga as a whole has been leading to this inevitable face-off between the Cullen clan and the Volturi coven. Initially, this climax pays off in the form of a huge battle between the two groups that is filled with infamy and death that packs a bit of an emotional punch. For a moment it seemed that the movie elevated itself above its predecessors by delivering a real payoff that was filled with high stakes and deadly consequences. Unfortunately, the movie ends up taking the cowards way out by capping of the battle with a little surprise that essentially unravels any real tension this movie had going for it. The end to the final battle may be one of the biggest cop-outs to hit the big screen in years. Without being specific, the movie ensures that the series could continue if need be by giving all of the characters an escape that leads to a happy ending for all with no real impact being visible.

The characters in the Twilight Saga has never been particularly captivating and this movie does nothing to change that. Edward is still incredible awkward, Jacob is still overly arrogant, and Bella is still devoid of much real emotion. What is even more shocking about the characters in this movie is just how many new characters are introduced in the final act. The Cullens go around the world to rally their friends to help them protect Renessmee which leads to several quick and underdeveloped introductions. Sadly none of them get more than a couple of lines despite the fact that many of them seem far more interesting than any of the main cast.

Director Bill Condon manages to deliver a direction that is a cut above its predecessor by delivering a decent art direction and a fairly compelling showdown at the end of the movie. The fundamental problem with this movie is the script which has some of the corniest dialog I’ve heard all year. The poor script isn’t helped by the performances from the actors who cannot help but cheese up the delivery of some of these truly awful lines.

Overall this is a movie that only fans will be able to fully appreciate. The movie does nothing to raise the bar over past entries in the series and seems content with its mediocre at very best delivery. If you are willing to suspend your belief far enough to forgive the dialog, the acting, the muddled story, and the sub-par direction then you may find yourself having a good time particularly during the climax which does deliver a really fun action set piece. If you are not a fan then you are probably not going to be too accepting or forgiving of cheap explanations given near the movie’s conclusion which allow for every character to walk away with no real worries.

If you’re fan of The Twilight Saga then this is probably the series wrap up you were hoping for and expecting, but if you have not enjoyed past entrees then Breaking Dawn Part 2 is not worth the outing. 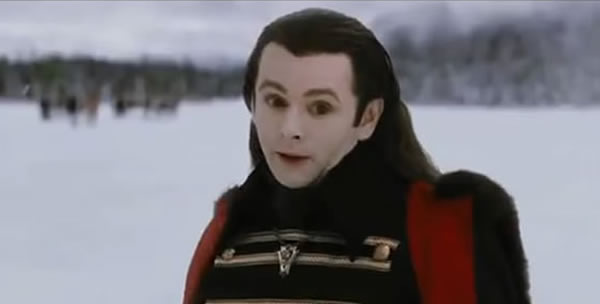 Even if you put aside the fundamental problems with the series plot as a whole, this movie still has several major issues including pacing and execution. The biggest issue is without a doubt the fact that the movie spends the bulk of its time building to a climatic showdown that ultimately does not matter by using one of the cheapest writing tactics I’ve seen on the big screen in years. COP-OUT ENDING

It’s really sad that some decent actors such as Michael Sheen, Robert Pattinson, Billy Burke, and Maggie Grace are so totally limited by the poorly written script that is absolutely plastered with bad dialog that only someone in high school could have conceived. The worst part is that none of these characters have arcs to speak of in this movie. All of the characters appeared unchanged and unaffected by the events of the movie which borderline renders the entire movie ineffective.

Bill Codon’s direction is perhaps the strongest aspect of the film because he does give the movie a sharper look than other entrees. The climatic battle at the end is also well put together by series standards.

Overall Effectiveness of the Movie: 3.0

As someone who is not a fan of the series I cannot say I was remotely impressed by anything I saw in this movie. The movie was boring and laughably written which makes it that much harder to swallow. I will say that out of all the entrees so far this may be the one I found myself enjoying the most because of a climax that was fun and some exposition that was silly enjoy to smirk at. I cannot speak for the fans, but as someone who has read one book and only seen the other movies once, I was not surprised or convinced that there was something great that I have been missing.