“I’m beginning this newscast by apologizing to the American people for the failure of this program during the time I’ve been in charge of it. The reason we failed isn’t a mystery. We took a dive for the ratings. I”m quitting the circus;switching teams. I’m going with the guys who are getting creamed. “

HBO’s The Newsroom is the latest of Aaron Sorkin‘s exploits into the political realm by getting behind the scenes of the people delivering our news. Sorkin is known for his usually political style with shows like The West Wing and movies like Charlie Wilson’s War or The American President, but this time he is moving out of Washington and into the commercial driven media of network news. Sorkin’s greatest strength and his greatest weakness is his very smart, clever, and witty writing. In his past projects this type of writing has played very powerfully, but at times seems just a bit out of place particularly whenever it came to more personal character moments. What is it about The Newsroom that was so appealing that I found myself watching every week? 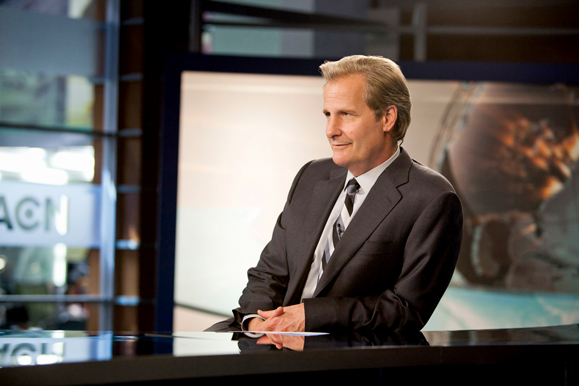 The Newsroom begins by introducing us to Will McAvoy(Jeff Daniels), a news anchor who has become a former shell of himself despite his incredibly high ratings and ability to please audiences by not stepping on toes. In a brilliantly written and acted intro to the show, McAvoy has an epitome about America that shows his true colors in front of a wide audience which drops a bomb on his popularity. McAvoy manages to point out problems that runs to the core of where America is at while  also managing to upset just about everyone in the audience. Not long after this incident, McAvoy has to redefine his career whenever his boss Charlie Skinner(Sam Waterston) demands that McAvoy do a new show under an executive producer that actually knows Will named MacKenzie McHale(Emily Mortimer). There is a great deal of tension as MacKenzie and Will used to be romantically involved, but because of this she understands how to push Will to be the great news anchor that America needs. Will becomes part of a Newsroom for a fictional network called Atlantas Cable News(ACN) that is made up of producers Jim(John Gallagher Jr.),Maggie(Alison Pill), and Don(Thomas Sadoski); economist Sloan Sabbith(Olivia Munn), and technology specialist Neal Sampat(Dev Patel). Throughout the course of the season, the show tackles news from April 2010 to August 2011 with stories like the BP oil spill, the rise of the Tea Party, the death of Osama Bin Laden, and Congress’s  decision to raise the debt ceiling. The show tackles all of these issues from Will’s perspective as he attempts to deliver the news not in an unbiased manner, but in an honest manner that is not controlled by ratings political power play.

At its heart The Newsroom is really Sorkin’s critique of big news networks like CNN, MSNBC, Fox News, and HLN. The show attempts to boil down and expose much of the ratings driven fallacy of News media by playing things from the perspective of a news network that is trying to deliver the news in a far less political way. Through this lens we get to see what Sorkin believes is the behind the scenes politics that determine just what gets reported. The writing for this particular point is absolutely spot on as Will at one point puts news networks in the same category as Jersey Shore by similarly trying to appease their own demographics. What ACN is trying to do is deliver news that avoids all of that as Will tries to keep things to the point by asking hard questions and criticizing untruths, misconceptions, and flat out idiocracy. The Newsroom is also very critical of the current state of politics, and particularly the Republican Party who Will believes has abandoned him for the uneducated extremists in the Tea Party. The first season is more or less the season of the Tea Party as the Tea Party is the group of people Will finds fault in the most. I do hope that future seasons is a little more critical of different groups to stay a bit more non-partisan, but the dynamic of the conflict of the Tea Party is certainly one of the more interesting points of the season. One other major theme that I picked up on frequently was the idea of what it means to be an American. ACN goes out of its way on multiple occasions to dispel myths about the fore-fathers, Christianity, and capitalism and in doing this their ultimate goal is to educate people as to what it means to an American in an informed matter. Obviously this is a very subjective idea, but the show is more about people knowing based on facts over myths.

This show is by no means a character study despite the fact that it does have interesting character dilemmas in it. Will’s character is all about getting past the lies and garbage and getting to the point as well as criticizing the garbage that does in fact hide the real news. After a couple of episodes it is revealed that Will is actually a Republican,  the very party his being so critical of. For most of the season this is the struggle that Will goes through as he is trying to decide what exactly is the right place in politics and where does the news step in. Will is so blatantly honest that he begins receiving death threats from angry viewers. The show also has several other characters, but none are remotely as interesting as Will. This is a bit of the achilles heal of the show as most of the characters, including Will at times work as Sorkin’s(and the other writer’s) mouthpiece to convey certain perspectives or political points. The show does try many times to give these characters depth with office romance and moral dilemmas forcing these characters to act like real people, but in general I did not believe most of these characters. This is not to say that I didn’t like many of them, but the writing style really does steal personality from most of these characters. Every character in this show talks the same way; smart, witty, snappy, and sarcastic. I found this to be very enjoyable and I even liked it whenever this was a way to talk about politics, but when it came down to the actual characters, I couldn’t believe in them because they all had essentially the same voice even when they were presenting opposing view points. This is a trait that many of Sorkin’s works have been criticized for, and while I don’t think this is his worst offense of this; I did find it a bit unbelievable. I was never immersed into the world of the show, but was constantly reminded that I was watching Sorkin’s take on the news. This writing style may certainly take away from the characters, but when it comes to the character of Will and the actual politics behind the show; I believe it is some of the best writing I’ve seen on TV.  Sorkin doesn’t mess around and points out the stupidity of the way news is presented and his faults in American politics. Whether you agree with Sorkin’s political views or not, it is very hard to criticize his sarcastic and no bullshit approach to his writing.

The show spends a pretty sizable chunk of its airtime on romances and love triangles which I personally found very annoying. As I’ve stated; I do not think the characters in this show are particularly believable so I find it very hard to really care about who’s with who. Sometimes these subplots do deliver some nice humor, but it seems annoying and like a waste of time. The idea the show is taking on is brilliant, and when it is focused and it is tackling American news and politics it is gold, but sadly it is inconsistent because it spends so much time on the relationships. I find these relationships odd and out of place because I think it is very evident that they are not what this show is about. It seems to me that maybe Sorkin or HBO almost feel obligated to throw these types of things in to reach and appease a wider audience than this show was designed for. Overall I really like this show; I love what it is trying to do as a piece of smart, sarcastic criticism, but I still find it inconsistent overall because of its over the top characters and uninteresting romances. The Newsroom is certainly a show that has the potential to be great, but it needs to refocus what it really wants to be about for its second season.

I’d definitely recommend the Newsroom to anyone who is interested in political dramas. The show is a smart, enjoyable, and overall  an on point drama that delves into the news media like no other movie or TV show I’ve seen before. People who tend to find themselves liking the Tea Party or people who cannot remove themselves from their politcal party may not appreciate much of the criticism Sorkin is dealing out, but I also think that people who have that problem probably need to A)lighten up and learn to laugh at themselves, and B)be open to criticism; no party of movement is perfect by any means, and all this show is doing is looking through the myth and critically looking at what’s there. The Newsroom just wrapped up its first season and will return to HBO in June 2013. 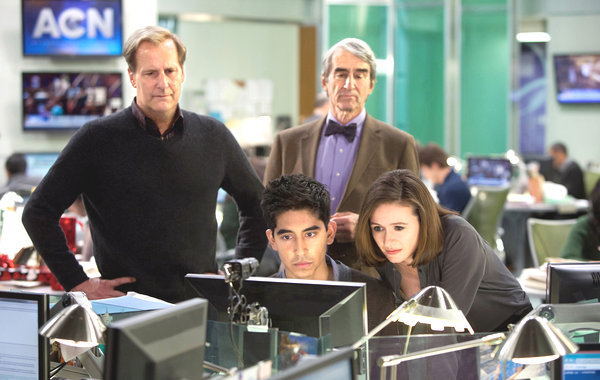