“Are you willing to pay the price your freedom will cost? “

Last year Pixar proved that it was not invincible with the release of Cars 2. This year Pixar is making another less risky film that delves into the world of fairy tales that they have generally stayed away from. The movie features Pixar’s first lead lady both on the screen and behind with the scenes with the character of Merinda and co-director Brenda Chapman. While the premise of setting a fairy tale in the Scottish kingdoms is certainly an intriguing one; is it different enough the separate this film from Disney’s other princess tales(particularly a stylistically similar Tangled)? Did Pixar make a comeback or have they fallen into slump after their excellent 15 year run? 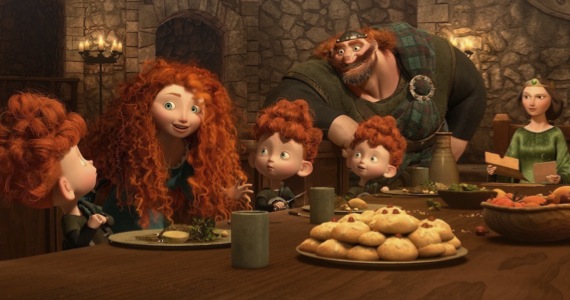 Brave begins with a prologue that introduces us to a very young princess Merinda(Kelly Macdonald),  her mother Queen Elinor(Emma Thompson), and her father King Fergus(Billy Connolly). In this scene we get to see a little bit of the family dynamic as Merinda loves shooting her bow. In the end of the scene a bear attacks their camp and Elinor and Merinda flee as Fergus fights him off. The movie then jumps ahead several years in which we see that a 17 year old Merinda is being trained to be a queen by her mother even though Merinda is clearly more interested in playing in the outdoors and shooting with her bow. When it is announced that Merinda is going to be married off to one of three suitors from other kingdoms to keep the peace; Merinda is furious because she really doesn’t want to marry anyone. Merinda’s mother is very insistent about the marriage for sake of tradition and pushes  Merinda to accept the hand of the man who is the victor of a tournament. When the tournament is over Merinda and her mother get into a huge fight and Merinda runs away while Elinor becomes very sad when she realized that she pushed her daughter away. Merinda flees into the woods and ends up following a path of wisps to the cabin of a witch. Merinda asks the witch if she can make a spell that will change her fate, and the witch crafts a spell in the form of a cake. Merinda returns to the kingdom and gives her mother the cake in the disguise of an apology. While Merinda believes this cake will change her mother’s mind; it actually changes her mother into a bear(which their entire kingdom hates as the bear at the beginning of the movie took King Fergus’s leg). Merinda must figure out how to changer her mother back and resolve their relationship before Elinor is a bear permanently and the kingdom goes to war.

The story in Brave is certainly a lot simpler than most Pixar movies, and it is also essentially a fairy tale about a princess at it’s core. What this amounts to is a story that feels like it’s been done before and also feels more like something Disney would conceptualize as opposed to Pixar. It’s sad to say, but the movie does fall into some of the conventions of a typical princess movie. Parents that don’t understand: check, opening song describing main character’s situation:check,  and society that places unfair expectations on said princess:check. The movie isn’t a complete rehash of other stories, but the story still has that formula at the core of its story. Pixar does however manage to put their own spin on the formula. The most interesting thing about the story was the setting of a Celtic kingdom. This setting allowed Pixar to flesh out a society and mythology that is rarely ever explored in any genre of film; at least in recent years. I also thought that the “moral of the story” if you will was actually a really good one for kids and their parents. The movie essentially is about repairing this parent/child relationship, and that both end s are at fault and both ends have to work together to understand each other. The movie portrays the daughter as unwilling to look at the big picture and her mother’s intentions, but it also shows Elinor who is so busy preparing her daughter for her future; she has no time to talk to Merinda to learn what she wants and what she is prepared for. In the end both of these characters have to admit fault and make a compromise if they want to have a healthy relationship. The last thing I will mention in terms of story is the humor in the movie. It was very hit or miss. While some of the physical gags were funny for the first stretch of the movie; they got rather old by the time the movie wraps up. The witty high brow humor that Pixar has been known for has been exchanged for something that is a bit more common among typical animated movies. This is unfortunate, and actually comes off as bad writing. While I found the movie incredibly funny at times; I also realized that Pixar was taking the lazy way out in terms of writing. I found the men of the kingdom hilarious, but I also found myself yawning through the middle section of the movie in which Elinor as a bear is the punchline of most of the jokes. It got old very quickly. Overall very hit or miss humor.

The character work is also a bit of a mixed batch in this film. While the two lead ladies are well developed and the Fergus is developed enough, most of the characters in this movie are rather 1 dimensional and only serve the plot as opposed to organic characters that Pixar is known for. Pixar has always had well rounded characters; even in supporting roles, but in this film the support just isn’t there. The leads however are really great. I found myself really liking Merinda and the way she was written. She was by all means a teenage rebel and to some degree a bit of a feminist character which may turn people off, but I found that it gave her character more dimension than most female characters we see in an animated movies. The real core of the character in the movie is that mother daughter relationship. The voice actors in this movie are great with Billy Connolly being a huge standout. Nearly everything that comes out of Fergus’s mouth is hilarious and I credit Connolly over the writing for that perk. His character was certainly the best bit of comedic relief in the film. Kelly Macdonald is a great lead and gives her character a likable edge despite being a bit of an angsty teenager. The support may not have been there, but the leads were solid.

The technical side of the film was brilliant! The movie looks absolutely gorgeous with beautiful landscaping and backdrops, lively character animation, and the most realistic animated hair you’ll ever see. I’m dead serious when I say that the Merinda’s hair may just have been the most technically impressive thing I’ve seen all year. If nothing else, Pixar proved that they still know how to push the limits on a technical level even if it’s storytelling takes a step back. The movie also has an excellent score that fits in perfectly with the Scottish setting of the film. I found myself humming one of the tunes the next day while the score was playing in my head. The movie definitely leaves an impression in the audio/visual department which gives directors Brenda Chapman and Mark Andrews an edge on this movie. This is both of these directors first time in the director’s seat of a Pixar movie and I have to say that for the most part they seem to understand the material and the audience this film is going out to.  While they definitely won’t be joining the line of legendary Pixar directors John Lasseter, Brad Bird, or Andrew Stanton; They do show promise for future projects.

Overall Brave is an enjoyable animated movie that still manages to have some touching moments, but in the end never reaches the depths of Pixar’s exceptional potential. The movie has a story that relies too much on the conventions of the Disney Princess formula, and has some very hit or miss humor. The movie is able to provide three solid lead characters well played by the actors, but fails to have a memorable or developed supporting cast. The movie has some outstanding visuals, an incredibly fitting and memorable score, and a decent, but not exceptional direction. The biggest problem this movie seems to have is a script that delivers many of the high standards that Pixar has developed over the years. This may not be the movie to show off Pixar’s real potential, but it is certainly enjoyable and a step up from Cars 2. I recommend this movie to anyone looking for good animated movie  this summer. I think this movie will play particularly well for mothers and their daughters.

The story is essentially a fairy tale about a princess and her mother who strive to rebuild their relationship. The story has a good heart, but relies too heavily on Disney’s conventional princess formula to be truly creative. Pixar manages to hit all the right notes here and does manage to fit in a touching moment or two, but the story still drags through act 2 of the movie. The humor implemented into the movie is very hit or miss.

Brave has a great lead trio made up of Merinda the princess, Elinor the queen, and Fergus the King. The three of these characters certainly seem likable and well rounded. The movie struggles to deliver supporting characters that are more than simply there for plot conventions. The performances in the movie are really good with my particular favorite being  Billy Connolly who manages to deliver nearly every line with some hint of humor to it. Kelly MacDonald does a great job at playing the lead Merinda whose character is both fun and interesting to watch.

Both directors do a good job with the material they are given; however I think that they were somewhat limited by the weaker script. The movie delivers on gorgeous visuals, an excellent musical score, and Oscar worthy hair effects. Seriously; a new award should be “Best CGI Hair”. Visually this is easily one of Pixar’s best.

This movie is certainly a step above most theatrical animated movies, however I also think that this is one of Pixar’s weaker outings. The movie does manage to be funny even if some jokes fall flat, there is a heartfelt message to be found, and kids seem to love it. The movie delivers to some extent in most categories you would expect even if the movie does not deliver in the best way it could have. This movie should have been better, but unfortunately the script went the  formulated Disney route as opposed to the deeper, more creative Pixar route in terms of the story it wanted to tell.  Either way Brave is a really fine movie; just not the great movie Pixar fans expected.