When I was much younger I used to watch quite a bit of the sci-fi channel. I went through a phase where that was what I watched for many hours on weekends during the B-movie movie marathons. Among the movies I used to watch, the first and second Underworld movies were among them. Underworld has been a series that I have been pretty much apathetic of throughout the years, but when I heard a new one was coming out I for some reason became interested. I decided to go back and watch all three of the other movies, and when I was finished I discovered that the movies really did fit right in on the sci-fi channel. They may have been a step or two better than sci-fi original movies, but they certainly didn’t lend themselves to anything remotely exceptional even in the arena of entertainment. While I did find them mildly entertaining, I was still did not see anything remotely better than run of the mill about them. They weren’t B-movies, but they certainly weren’t good either.  This directly relates to the expectations I had for the new Underworld in which I was simply hoping for some decent vampire vs. werewolf entertainment. Does the new Underworld break the mold entertain in new and exciting ways, or does it fall in line with its mediocre at best predecessors? 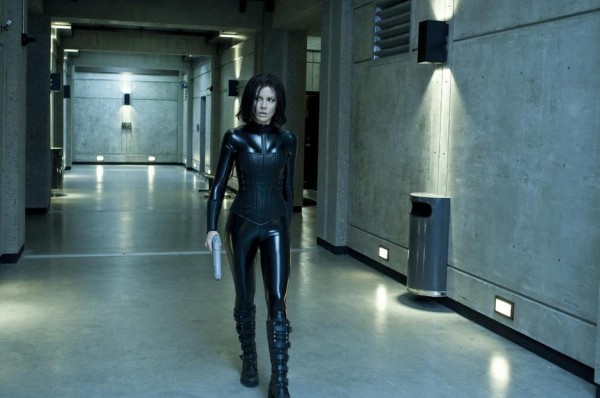 The story of the movie picks up by showing us the impact that the discovery of werewolves and vampires had in society. Humans were in an outrage and begin a purge of the two different species which makes Selene(Kate Beckinsale) and Michael(stand in for Scott Speedman) huge targets as they are both hybrids of the two. Early in the movie Michael is captured by the humans and Selene attempts to rescue him, falling right into a trap. The humans manage to cryo-freeze both of them. Selene eventually wakes up twelve years later and immediately begins having visions that she believes is Michael’s way of communicating with her. She breaks out of the human captivity and begins pursuing her visions which lead into the bigger story filled with twists, lies, and conspiracies.

If the plot of the movie sounds a little familiar and a little bit thin; it’s because it is. The movie certainly draws from many other films, books, and even graphic novels and sort of meshes them into one story. While this is feasible when done creatively, I do not think that Underworld Awakening brings enough to the table to make meshing ideas together very cool or interesting.  There were several times during the movie that I got the feeling of deja vu because of all how much the movie seemed similar to Blade, X2,  The Matrix, Equilibrium, and just about any other dark action movie that humans are hunting the protagonist. The other major problem I had with the story of the movie was just how aimless and unnecessary the entire film felt. The first film was fine for what it was, the second seemed weak but actually had loose ends to tie up, and Rise of the Lycans did an admirable job at doing a prequel and filling in the mythology. What was the purpose of Awakening? I really couldn’t tell you. I suppose the fact that humans did find out about werewolves and vampires in Evolution left it open, but the movie really didn’t feel like it had a goal or a purpose with the exception of Selene wanting to find Michael……which is kind’ve unnecessary considering it really didn’t feel natural or organic. While the movie does seem to justify most of the action which I suppose gives it a pass for what it’s trying to do; it is ultimately very bland, predictable(save for one twist I didn’t expect), and flat. Why does Underworld Awakening exist? To make more money for Sony’s Screen Gems studio so that Screen Gems can make more really lame, but somehow still entertaining Resident Evil movies.

This movie actually has………almost no character development for any of the characters. The only real development is that Selene discovers another character that changes the way she sees things that should actually have an impact on the series should it continue. Aside from this development, all of the characters are really flat. And I mean flat. After Selene escapes from the humans and tries to find Michael she meets up with some generic vampires who have a generic old leader who of course rejects her. The generic leader has a generic young son who still believes in Selene.  The generic son helps her until he is generically removed from the film because his usefulness to the plot is out….until he is randomly brought back so that he can commit a generic act of heroism that saves Selene just in time. Aside from the vampires we also have some generic humans who are trying to kill her out of fear and some generic lycans who have their own agenda. And then there is the generic cop who for some reason decides to help Selene with a very paper thin explanation given as to why he would do such a thing. Are you getting my point? None of the characters are memorable or remotely developed.  I don’t go to these movies for character or story, but when these movies attempt to present themselves as very serious it is hard not to critique how much they fail. I suppose Selene is the only character who reall matters anymore so there’s no real reason to care about anyone else.

The last thing I want to talk about is the direction and the action of the movie. I’ll say that if these movies have anything down its the very dark and almost Gothic aesthetic art direction. The cities look washed out like they are dying while the underground areas are even darker and emptier. I think that this direction actually really compliments all of the films, but especially this film. The dark and empty look really feeds that feeling of hopelessness for both the vampires and the lycans in a world filled with humans that hate them. Aside from the pretty solid art direction the movie falls pretty flat. While many of the elements like action, writing, cinematography, and casting aren’t necessarily bad, they really aren’t anything special. When you put them all  together you get a  direction that is very average. The action is certainly enjoyable at times, but I couldn’t shake the feeling that it could be much cooler and more exciting. None of the action is done well enough to seperate itself from any other dark action movie that has already done the same things bigger and better which means that the film falls into the rut of being average at best. The very same can be said for these other categories. The actors do a decent job with their parts, but nothing too special while the dialog writing is bearable, but hardly clever.

Overall Underworld Awakening is an aimless sequel filled with flat characters, a very uninspired story, a cool look, and an average at best direction. 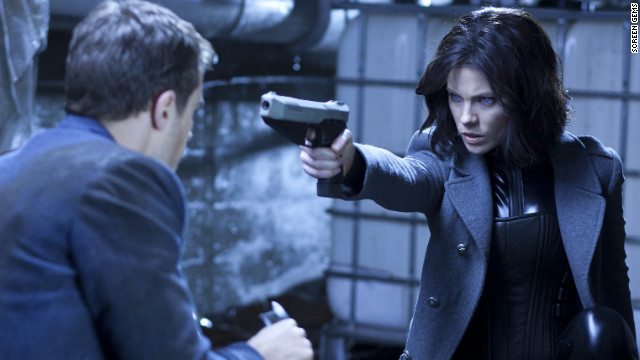 The story for the movie feels extremely unnecessary and inorganic and fails to do anything new or interesting. It isn’t original, it never feels exciting, and it hardly ends on a promising note. It succeeds at getting the characters from point A to point B, but takes itself far more seriously than it should.

Selene is the only character in the movie to have anything that even resembles character growth. All of the other characters, and I mean all of them are two dimensional at best. There are several generic characters there that are only there so that the plot can do something. They feel more like robots just going through the motions to get Selene to the next level.

The movie does have a really cool aesthetic look to it which does give an ominous vibe to the movie. Aside from this the movie does many things well enough not to be considered bad, but hardly does enough to be considered good in any sense.  The action is entertaining at times, but I couldn’t shake the feeling that I’d seen the exact same type of action done much better in other movies. The direction is mediocre at best, meh at worst.

Overall Effectiveness of the movie: 3

Its very hard to pin down this category on this movie because this movie takes itself seriously like and A-movie, but has the budget and production values of a B-movie. Its certainly better than a B-movie, but its definitely not of great craftsmanship either. Since it appears that it wants to be a low budget action movie, I’ll grade it as such. There are other low budget action movies that do things far more entertaining and innovative than this. This movie is very uninspired and unoriginal in its story and action. Was I entertained? Yes, but I certainly put this in the realm of cheap and mindless entertainment that I’ll probably never watch again.