Blade Runner is widely considered one of the greatest science fiction films of all time and it is so because of its multilayered story filled with different messages and ideologies. The movie covers quite a few different territories ranging from themes of post-modern capitalism to anti-consumerism to themes of what it means to be human. It may have taken twenty-five years for Blade Runner to be fully realized from a creative standpoint, but the messages of the film have never been stronger than they are today. 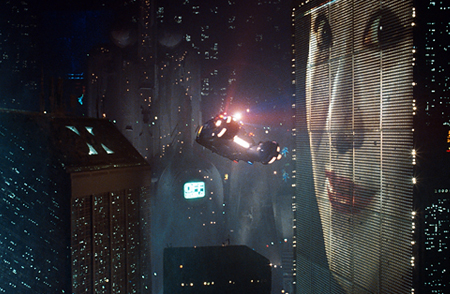 Blade Runner was a film made in 1982 that depicted Los Angeles in the year 2019 as a city that had been polluted by a form of corrupted capitalism. In this world people had created machines called replicants that looked identical to humans. The replicants had since been banned from earth and reduced to working on colonies on other planets. When a group of replicants escape from their colony and return to earth Rick Deckard, a blade runner (essentially a bounty hunter who hunts replicants), is called upon by the police to hunt them down. While the plot of the film is pretty simple, the film deals with many complex themes such as what it means to be human and the difference between man and God. I believe that these themes and the complexity of them is what will be remembered more than the actual film itself.  Two of the biggest themes in the film are the difference between a man and a god and the dark side of capitalism and consumerism. These ideas and themes really fuel both the heart and intellect of the film created by Ridley Scott (who actually considers this film to be his most complete and personal work (Greenwald)).

Blade Runner spends a lot of time dealing with the difference between what makes a man. In the film the replicants look like humans, act like humans, and even think like humans. The film looks at this idea from many different angles, but I think one of the best examples of this idea is the character of Rachael who has human memories implanted into her mind. When Tyrell was constructing her he decided to experiment to see if replicants could develop emotions given the proper amount of time in a certain environment. He gave Rachael memories so that she could feel as if she was much older than she actually was while also being completely unaware of the fact that she was a replicant. As the film develops we see that she does in fact have emotions as she falls in love with Deckard and also decides to run away from her master. Why would someone run away from their owner if they did not have some sort of anger or confusion? Why would she run to Deckard unless she had some sort of emotions attached to him resonate within her? These are questions the film raises, but answers very few of them because the film begs for the audience to think about themselves. The big question that is not directly asked is does she have a soul if she has the body, mind, and emotions of a human? This question then goes right back to what makes humans human? While the film certainly gives several insights into what it means to be human, it hardly answers the question for the audience.

If the film deals with robots that strive for humanity the next logical question that can be raised is does this make a man a god if he can create a being that looks like a human, act like a human, and even think like a human? If these replicants truly do have souls then what does that make the creator? Does that make the creator a god? This question is a direct reference to Tyrell who is a millionare tycoon who has built an empire on profit from replicants. He is constantly experimenting with replicants to see what they can truly become. As a safety precaution Tyrell gives all of the replicants a maximum of four years to live. Eventually the leader of the escaped replicants, Roy Batty, seeks out Tyrell and demands the answer to a longer life. What is most interesting about the conversation Roy has with Tyrell is that Roy calls him father. This one line certainly implies that the creator/creation relationship runs very deep particularly in the replicant. In one way this highlights the desire Roy has to become a free human, but more importantly I believe that it shows just how flawed a creator Tyrell really is. In the eyes of the replicant this man is God and he comes to him seeking answers and all Tyrell offers him is questions and rejection. It is at this point that Roy kisses Tyrell right before murdering him. I believe that more than almost any scene in this movie that there is biblical imagery comparing their relationship to that of Jesus Christ and Judas. Judas betrayed Jesus with a kiss which directly led to the crucifixion and death of Christ while Roy kissed Tyrell right before ending his life. Was Tyrell a God if he created beings that could look, act, and feel like a human? Blade Runner is taking the ideas and questions of what makes a man and what makes a God and dissects them without actually providing any clear cut answers.


A look at the environment and world of Blade Runner

The other major theme and idea that is more subtly presented is the dark side of capitalism and consumerism. The movie is set in 2019 which was 37 years after this movie was released. The movie portrays a very dark and gritty future that is consumed by smog, factories, trash, and advertisements. While this setting is never specifically pointed out the movie makes it prominent enough that it is almost impossible to ignore. The city of Los Angeles has become totally run with non-organic life (other than humans) and one of the most obvious signs of this is the fact that all of the animals are actually machines programmed to act like real animals. Little clues like this are spread all throughout the film and the way the city if portrayed is saturated with the idea of total consumerism. The city is littered with billboards and product placement with everything from Atari to Coka-Cola. I believe that the setting was meant to show the dark side of what America valued in the 1980s. Americans take pride in being able buy the things they want and having the ability to earn money to get what they want. We love always looking for the next big thing to capitalize on. This film takes this American value of being able to buy whatever you want and shows the dark possibilities of what a future ruled by this idealism can lead to. The film also portrays a world where the wealthy corporations are sitting on top of the political food chain with all of the power. This setting is another warning of what corporations could do when given too much power. I do not think that Ridley Scott or the writers were trying to flat out say that these are evil things, but I do think that they were trying to make people aware of the fallacy and potential danger of putting too much stock in a completely deregulated corporate world or a world where advertisements are almost completely inescapable because of this value system that takes pride in having the ability to buy things with hard earned money.

These ideas may have been executed in this film in the 1980s, but I believe that these warnings are still very important to the world we live in today. The warning against corporate deregulation and consumerism is especially an issue we are facing today on Wall Street (have you been watching the protests?) and in the crazy amount of advertising people in America are exposed to on a daily basis. The definition of a man and the definition of what is a god is also an issue that has come about ever since the successful clone of Dolly the sheep in 1996 when debating the ethics of cloning. Blade Runner may have been made in the 80s, but the ideas and themes engrained in this film are something that is certainly still relevant now.