“If I drive for you, you give me a time and a place. I give you a five-minute window, anything happens in that five minutes and I’m yours no matter what. I don’t sit in while you’re running it down; I don’t carry a gun… I drive”

The title of Drive may be a bit misleading as to what this film is actually about but this movie is non the less a very interesting take on car chasing in a world with Fast Fives and Transforming vehicles. The movie is essentially an indie action movie brought to us from the director of Bronson starring Ryan Gosling. The premise is centered on the unnamed character who is referred to as Driver who (as his title hints) drives stunt cars by day and drives criminals around by night. The premise sounds fairly interesting, but can it really survive as an indie action movie in a world that loves to see explosions and over the top car chases? 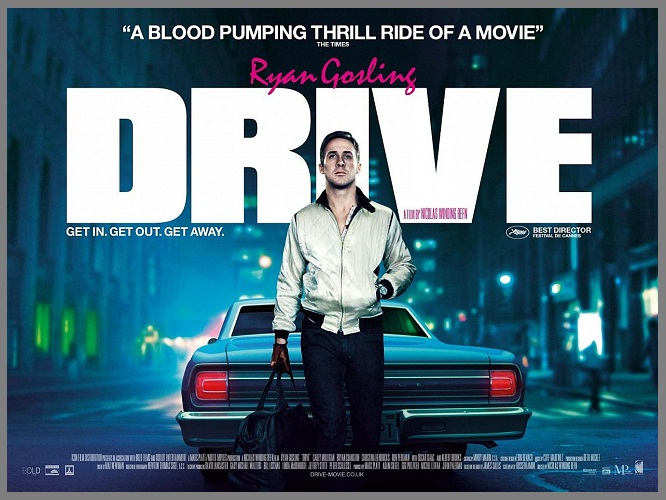 As I mentioned above the movie is about a guy with a mysterious past who drives stunt cars for his friend Shannon(played by the terrific Bryan Cranston) by day and by night takes on some jobs that are less than legal. Near the beginning of the movie we get to see a really cool car chase that may not be the most action oriented, but is still just as intense as anything other car movies have put out recently(*Fast Five* cough). The chase really isn’t much of a chase and it really isn’t about outrunning the pursuers as much as its about outsmarting them. Needless to say this opening chase is really cool. The movie begins to heat up when Driver begins getting to know his neighbor(Carey Mulligan) and her son better. As he learns about them he also learns that her husband who is now in prison got mixed up with some nasty people. The movie really takes off when her husband gets out of prison and Driver  tries to help him pay off some debts.

The story itself is pretty solid and it is certainly good enough to keep me at least moderately engaged throughout the film, but I will admit that I felt like the 2nd act was a little drug out. While trying to develop the character the movie slows down to nearly a snail’s pace. I love character dramas and seeing characters evolve, but the dragging in this movie could have been taken care of had some scenes been cut. I love that this was an action movie that wasn’t all about the action and all about blowing things up every 10 seconds, but I do think that the pacing in this movie could have benefited from either some cut scenes or maybe worked in some more interesting dialog or something along those lines. Despite the fact that the pacing of the story is a little slow; I really enjoyed the story that did unfold. It was a sad story about the wrong guy being in the wrong place helping the wrong people. Things in this movie never get better. I also might add that this film had a very 1980s feel to it. Everything from the font in the credits to some of the camera shots to the music screamed the 80s. I personally am not a fan of the 80s, but I did really appreciate the touch that it gave the movie.

The movie is very slow and is far more character driven than most action movies out there these days. The movie has a great supporting cast with veterans such as Cranston, Albert Brooks, and the always great Ron Perlman  giving Gosling’s mostly silent character the extra energy to keep the film engaging. Gosling does a pretty solid job himself. While his performance is nothing Oscar worthy I still found myself compelled to want to see more of it even after the film ended. He gives the nameless and silent character a mysterious vibe while still being fairly charming(if a little creepy at times). Cranston continues to impress me as he plays yet another character that is different than any other he has done. The character of Shannon is a likable but greedy mentor figure for Driver. He’s the guy who gets all the jobs and he’s the only person who seems to care much for Driver as the film begins. Aside from Cranston it is also very apparent that Ron Perlman is having a great time playing his role. His character is a straight up jerk who is always cracking some type of insult towards someone and it was always fun to watch his performance. I will definitely say that the acting is one of the stronger points of this movie overall. 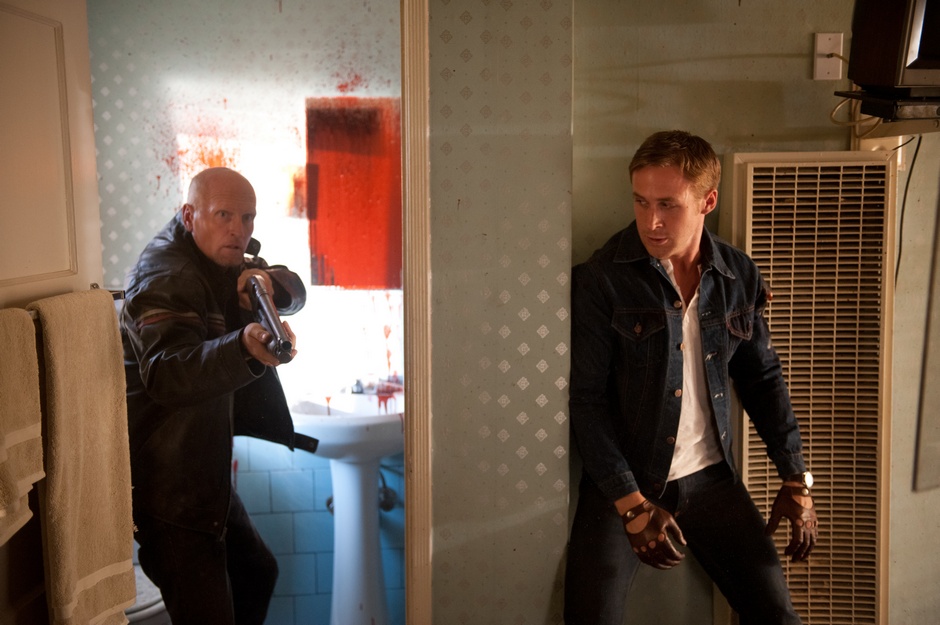 The other area of this film that I thought was handled extremely well were the car chases. There are only a couple of these chases in the movie, but they certainly succeed at being both fun and intense. The first one which I mentioned above was really brilliant in how it was paced and how we saw the entire chase from inside 1 car. The other takes place about mid-way through the movie and is a really intense chase that hearkens back to the chase scenes of the classic like Bullitt and The French Connection. These were chase scenes that felt natural and they looked cool and exciting without going over the top. This is a type of chase scene that has become extremely rare in modern action movies because of the sheer over the top nature of some of the more recent chase scenes. I really have to applaud director Nicolas Winding Refn for being able to create these really great scenes without playing things over the top. The entire direction Refn takes this movie in is an odd one. As I said above this movie feels like and 80s style movie at times while other times it feels like an art cinema film. The tone of the movie is all over the place. Despite this the odd mix of styles and tones actually work out better than you would think with the mixture becoming more of a synthesis and less of a Frankenstein. The camera shots are gorgeous while the few CGI visual effects used look great.

Overall I think this is a movie that film buff and really old school(pre-Die Hard) action fans will enjoy. The movie brings in a great mixture of action, character, and style that all somehow meshes together to make a pretty entertaining final product. The direction and the camera work all look exceptional as we get some very unique takes on action scenes and cinematography. The cast is solid with Gosling playing the nearly silent and nameless hero while Cranston,Perlman, and Mulligan picked up the lack of dialog for him. The story may have been a bit of a drag in the middle section of the movie, but overall the story works really well for what the film is aiming to accomplish. While film buffs should certainly enjoy this movie I should warn people who wish to see an adrenaline pumping action movie that this may not be the film to see simply because the movie is character, story, and artistic value first and then action second. 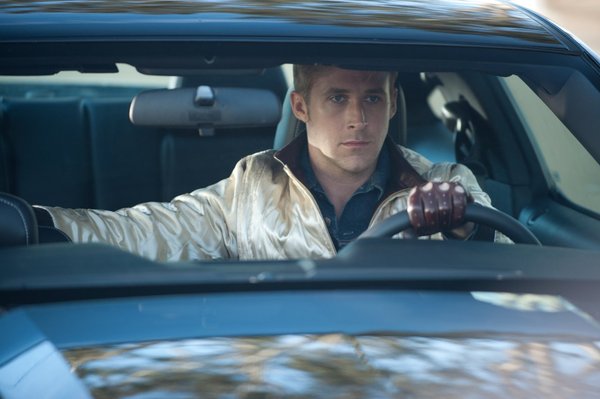 The story is a fairly ambitious one  as its about a character who works part time by day and works full time by night driving cars. The story many times feels as if its ripped from the 80s with the way it is executed.  The pacing slows up quite a bit in the middle section of the movie, but it all pays off in the final act of the film

Ryan Gosling does a pretty solid job as playing the silent protagonist but I really thought it was Cranston and Perlman that stole the show in their supporting roles. All of the charters seem at least somewhat developed with each one having motives(other than Driver curiously enough) that play into how the film unfolds. The character of Driver is written ambiguously and portrayed mysteriously which makes his character that much more interesting even if you know next to nothing about him.

The cinematography is terrific in this film as we get to see some really unique takes on how to car chases and sky shots of the city. Aside from just the look the director is able to take all of these different styles and tones and mesh them into something that works much better than you’d expect.

The reason people are seeing this is to see a different take on a familiar genre. The action movie genre has become rather formulated in the last 20 years and its nice to see that there are films out there to break the mold. This movie certainly delivers on that promise, but aside from that you’re essentially watching an art house cinema film which is fine by me, but I think there will be audiences who are left wanting more. The movie works really well on a character level, a stylistic level, and a story level. To this extent it succeeds in giving us what we want, but aside from that we’re looking at a movie that isn’t entirely sure what it wants to deliver because of all of its different styles that are meshed into 1 film. This makes this category extremely hard to rate. Overall the film works better than expected.