The western genre was all but defeated when science fiction broke through to the mainstream with films like Star Wars in the 1970s and 80s. This is mostly because the tried and true formula of westerns was getting very stale and science fiction offered a way to tell similar stories in flashier and more robust ways. Many ideas and themes from old westerns still resurface from time to time these days(Firefly, Serenity) and once an a while there will be some very good westerns that manage to make their way into the theaters(3:10 to Yuma, Appaloosa, No Country for Old Men, True Grit) and become cult hits.  With all of this said it was very intriguing that Jon Favreau as well as an all-star production team and an all star cast would be working together to make a movie that merged the western genre with the genre that essentially killed westerns. Cowboys and Aliens may seem like a ridiculous concept but because of all of the big names attached to the project it seems just as ambitious as it is intriguing. With writers Damon Lindelof(Lost; Star Trek), Alex Kurtzman(Fringe, Star Trek), and Roberto Orci(Fringe, Star Trek), producer Ron Howard(Apollo 13, A Beautiful Mind), director Jon Favreau(Iron Man), and the all star cast Daniel Craig(Casino Royale), Harrison Ford(Indiana Jones, Star Wars), Olivia Wilde(Tron Legacy), and Sam Rockwell(Iron Man 2, Moon) this movie definitly seemed to have more potential than most other films that were hitting the big screen this summer. Can Cowboys & Aliens mesh the western and science fiction genres seamlessly or will is fall flat and fail to live up to its potential? 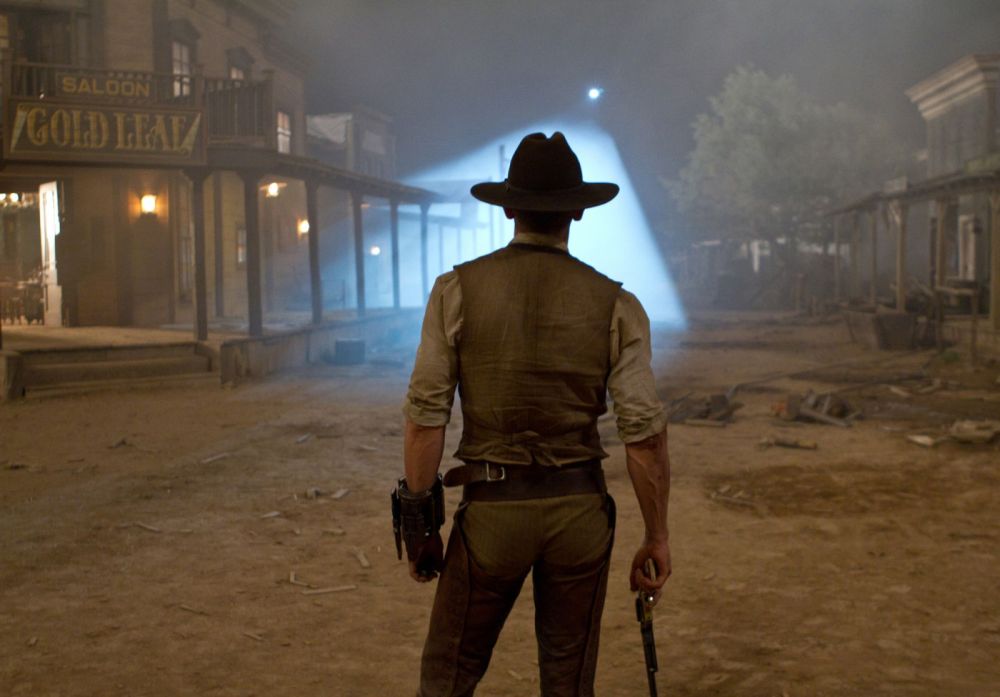 Cowboys and Aliens starts out just like a typical western. A stranger(Daniel Craig) who doesn’t remember who he is or where he comes from wanders into the town of Absolution and meets many of the townspeople including the owner of the local saloon, Doc(Sam Rockwell), the local preacher(Clancy Brown),  and a mysterious woman named Ella(Olivia Wilde).  The stranger figures out that he is Jake Lonergan when he sees a wanted sign and is arrested for crimes he didn’t even know he committed. Eventually the local cattle farmer Colonel Dolarhyde(Harrison Ford) makes his way into town because he also wants a piece of Lonergan. It is at this point that several mysterious lights appear in the sky and begin approaching the small town of Absolution. They begin blowing up buildings and snatching the townspeople, taking them to who knows where. After the invasion whats left of the town bans together to go and find their loved ones from the “demon” creatures. The plot for this movie may sound a bit ridiculous, but director Jon Favereau actually plays the entire movie off in a very straight and serious tone. This may come as a surprise to many viewers(myself included) who were expecting the movie to cheese things up a bit and be a little more over the top and a little less down to earth. This being said I really feel like the serious tone benefited the movie in the long run. Sure I didn’t laugh at the action and smile at cheesy dialog, but in the end the serious tone of the movie grounded it and made it something more than a run of the mill blockbuster. The story and the tone of Cowboys and Aliens still maintains a western feel which is why I think that despite the elements of science fiction that is interwoven into the story the movie would still be classified as more of a western.  I really have to hand it to the writers and Jon Favereau for taking the high road and keeping the movie straight as opposed to over the top.

When it comes to characters this movie simply borrows from many archetypes found in most westerns. There is the stranger, the preacher, the rich and racist cattle owner, the saloon owner, and the really mysterious and attractive woman. All of these can be found in almost any old western and Cowboys and Aliens makes no bones about taking those archetypes and putting them in a slightly different situation. What really makes these characters interesting and memorable really isn’t how they are written, but the really solid performances turned in by the great cast of actors. Daniel Craig brings a really dark and bruiting interpretation of the stranger while Harrison Ford makes an extremely unlikable character interesting to watch. Each one off the actors in this movie turns in a memorable performance. If there had been a weak link in this cast the movie really would have failed just because of the serious, but potentially cheesy nature of the film.

The direction was the one thing that was either going to make or break this film. Had Jon Favereau let even a little bit of cheesy humor into this film it really could have taken the whole film down, but luckily he decided to play everything straight. Sure the film still has a little bit of humor to it, but all of it is within the context of the film. Aside from the tone Favereau also gives the film a great western look to it as he uses many of the same camera techniques that can be found in many old westerns with many wide shots of the beautiful landscapes. Cinematography is pretty solid for blockbuster but still nothing truly groundbreaking. If there is one thing director Jon Favereau fails to do in Cowboys and Aliens it is make the Aliens more unique and memorable. The movie certainly succeeds as a western, but the science fiction side of the movie, especially the aliens, feels a little generic and their motives and goals are fairly generic. Luckily the emphasis of the movie is on the people and the western element because the science fiction end of the movie while not bad, is just nothing new.

Overall Cowboys and Aliens is a pretty good western and an overall decent movie that will keep audiences engaged and curious. The story is the same old tale with a science fiction spin to it while the characters are the same characters we’ve seen before with a more modern and interesting interpretation given to them. The movie may not be the hilarious and over the top popcorn flick that some audiences were hoping for, but it becomes something more than cheap entertainment by playing things straight and sticking to its western roots. This movie really could have been very bad had it fallen into the wrong hands, but because it was so well written, acted, and directed it succeeded in becoming a good movie. The Aliens are the weak link of the film because of their fairly generic motives and stereotypical role as evil aliens in the story. The movie was very good at being a western but overall it was not a terrific film; just a very solid one. 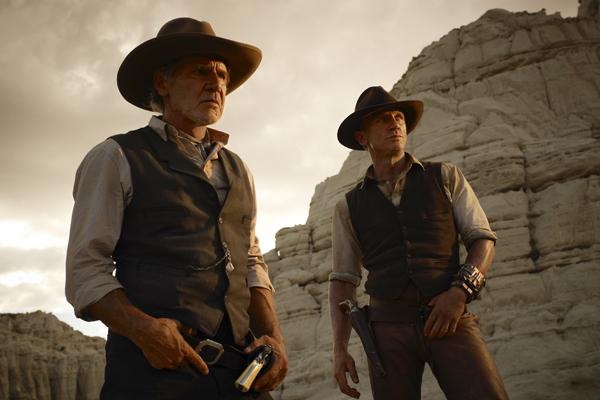 The story is nothing new really; it just takes the same concepts and ideas already used in old westerns and throws aliens into the mix. The movie takes on a very serious tone and completely avoids becoming as ridiculous as the title suggests it could be. The movie may have several hints of science fiction, but the movie is certainly a western above all else.  The movie successfully blends the two genres without getting to crazy. Despite this the aliens and their motives are fairly generic.

Overall Effectiveness of the Film: 8.0

Cowboys and Aliens definitely delivers in giving audiences a great western meshed with a little bit of science fiction. Despite the film’s seemingly ridiculous nature, the movie succeeds at being more than simple summer entertainment. Even though this is not a truly great movie it does do things that no other movie has ever done and it does them well for the most part. While this movie may not be the best it is certainly unique which makes it something special.