Green Lantern is DC’s biggest hope to launch the DC universe to the big screen. Other than Green Lantern the only real DC adaptions have been either Batman or Superman adaptions. DC promised that Green Lantern would not only bring that character to the big screen and but would also lay the ground work for their future film adaptions of their other heroes such as the Flash or Wonder Woman. Those are some pretty big promises to fill considering the only real recent success DC has had with their super hero franchises has been Nolan’s Batman series.  This movie was truly a gamble on DC’s part if they really hoped to bring their comic book universe to the big screen. Luckily the movie does boast quite a bit of talent from stars Ryan Reynolds,Mark Strong, Temuera Morrison, and the voices of Michael Clarke Duncan and Geoffrey Rush as well as the director Martin Campbell(director of Casino Royale). So despite the fact that this movie was a big risk it appeares that DC may have something special on their hands. Did Green Lantern successfully launch the DC film universe or should we just stick to The Dark Knight for our DC fix? 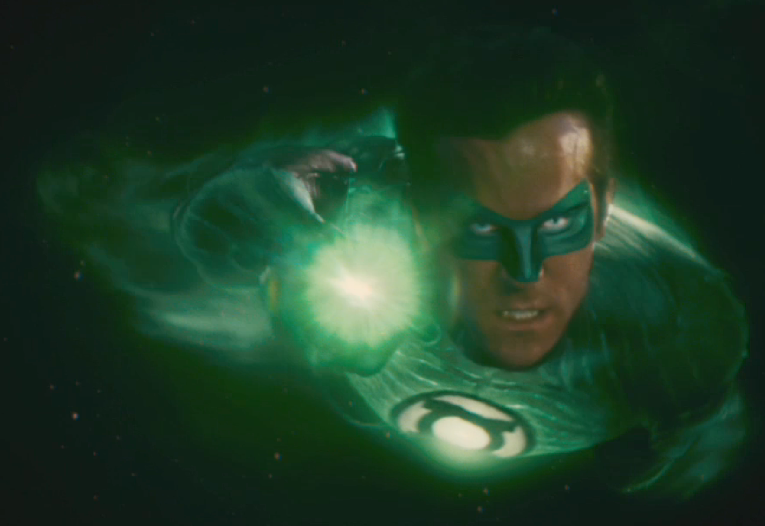 Green Lantern starts out by introducing us to the irresponsible fighter pilot Hal Jordan(Ryan Reynolds) who is late for a demonstration to show off some new automated piloting technology. What we see is that despite the fact that he is very irresponsible he has the will and desire to beat the odds. After the test his “its complicated” love interest, Carrol Ferris(Blake Lively) shows distaste for the crazy stunt that Hal pulled.  The other story line that opens the movie is the awakening of Paralax; a former guardian of the universe who was corrupted by the yellow energy fear. Paralax is awakened and he then begins devouring other planets and their inhabitants. On its journey Paralax finds the green lantern who imprisoned him, Abin Sur(Temuera Morrison) and fatally wounds him. Abin Sur is able to escape and goes to the closest inhabitable planet, earth. Once Abin Sur reaches earth he sends the ring out to choose a new owner. Eventually Hal is chosen by the ring to be Abin Sur’s successor. Hal is then transported to the planet Oa to be trained and initiated into the Green Lantern core. There is of course quite a bit more exposition to this film than what I am going to talk about but lets just say this; I am only talking about the interesting parts of the film.  Hal is then initated by Tomar-Re(voiced by Geoffrey Rush) and trained by Kilowag(voiced by Michael Clarke Duncan). After they get him trained they take him to see Sinestro(Mark Strong) as he unites the Green Lanterns to battle the growing evil that is Paralax. Sinestro then comes to Hal and tests his will(which is actually what powers the rings). After this Sinestro shows his distaste for Hal and the human race. Back on earth the government recovers Abin Sur body and they call in Dr. Hector Hammond(Peter Sarsgaard) to examine the body. While examining the body Hammond unknowingly picks up traces of Paralax that immediately begins affecting his body.  From this point the story moves onto the inevitable invasion of earth by Paralax(for an unexplained reason) and the fairly predictable outcome in the end. If this story sounds very exposition heavy its because it it. The movie drags on for what seems like a couple of hours before Hal actually dons the ring and becomes a green lantern. I personally am not against exposition movies if they are written well, but unfortunately  Green Lantern does not have the benefit of great and interesting dialog to make the talky scenes more interesting and it also never quite finds a pace. At times the story is very interesting and actually moves along very well(mostly anything that happens in space or on Oa), but at other times the movie gets extremely slow and uninteresting as the actors do their best to make the horribly written dialog(seriously George Lucas could take these guys  to school on a bad day) interesting. Aside from the dialog the movie also fails to have a story that remains tight. On the surface the story makes enough sense but as soon as you start to think about some of the things said or plot devices used you begin to scratch your head and wonder how any of the film makes sense.  The worst part about the story is that it feels like there actually is a great foundation for a story, but every hint of depth there is in this movie is shrugged off and watered down(there are times when the film acknowledges subplots but does nothing to capitalize on them). Overall the story may pass as doable for a run of the mill blockbuster but all of the plot holes and unexplored back story makes this a shallow and forgettable summer movie.

When it comes to characters development and the actors portraying them this movie is all over the radar. Ryan Reynolds who many fans thought would ruin the film actually ends up being one of the best parts of it. He never goes  so far over the top that he is Van Wilder, but still brings his typical sarcastic hilarious charm to the role. Despite the fact that he does a great job the script only allows him to be so good. With all of cheesy and over the top one liners its almost hard to wonder how Reynolds manages to ground the role. He is able to pull off Hal Jordan(who is pretty much the only developed character in this movie) in a new and fresh way without robbing the character of the comics of his roots.  Aside from Reynolds most of the other characters on earth are pretty terrible. They are all 2 dimensional and only a couple of them even serve a purpose.  Blake Lively gives a lukewarm performance for a character who is written as an almost beyond typical “its complicated” type of girl. She does the best she can but she is again limited by the poor writing for the character. The other main character who plays a role on earth is Hector Hammond who almost single handedly trashed any credibility this movie would have. Hector is a horribly written villain who does nothing but grow a horribly funny looking egghead in the middle of the movie. With Hammond I can’t give any credit to Peter Sarsgaard for at least trying to make the character good because he doesn’t. In fact Sarsgaard makes the already horribly written role even more horrible. He is laughably bad almost anytime he is on screen. Lets just say this; I’m looking for Michael Bay to present him with the Razzie for Worst Actor at this years Razzie awards. Since Hammond is supposed to represent a threat and since his character clearly doesn’t  the character really hurts the film as a whole and the absolute worst part about it is that Hammond ends up doing nothing and being a completely pointless character.  I’ll also mention that Amanda Waller randomly and pointlessly pops up in this movie for the DC fans who know who she is. Aside from the characters on earth we get Mark Strong who does a fantastic job at portraying Sinestro. He really pull off the character; its just too bad his character really doesn’t have much to do. Luckily we’ll probably see a sequel to Green Lantern and at that point Mark Strong can most likely take the spot light as the villain.

Overall I would say that Green Lantern tries hard and sometimes succeeds, but ultimately the writing and Hector Hammond are what pull this film to mediocrity. Although Ryan Reynolds does the best he can and even though most of the special effects look pretty good(aside from the absolutely laughably bad looking mask) they alone can not save this movie. Martin Campbell disappoints as a director not really bringing a solid direction to the table.  If I had to say simply what is wrong with the story its this; the Green Lantern corps and space scenes are awesome and exciting while the on earth scenes are boring, pointless, and in the end worthless. The movie tries very hard to succeed but sadly that isn’t all it takes. The script for the movie is terrible and that within itself limits the entire creative end of the film production. Green Lantern isn’t the worst superhero movie ever made, but for the movie that was supposed to launch DC’s new film universe it leaves an unstable foundation. I will say that despite the fact that this movie fails I felt like there is a possibility that a good sequel could be made. The character of Sinestro and Hal are still in tact and in the end that is all a sequel needs if done well. Does Green Lantern show promise for DC’s future? The answer is a resounding “maybe”. I would only recommend this film to those Green Lantern fans who really want to see it otherwise I would say save your money for another movie or go and see X-men First Class again.

The movie may be passable for a summer blockbuster but once you start to think about some of the explanations given or the plot devices used you start to wonder how this universe makes sense. There are are several plot hole and subplots that go nowhere. There are also several subplots that are clearly hinted at but not fleshed out. There is far more telling than there is showing in this movie

Hal Jordan does get some development which is great to see but most of the other characters are left as their 2 dimensional selves. There are several characters such as Sinestro that are very interesting but are given little to do and are never developed. Then there is Hector Hammond; a character so poorly written and acted that he really hurts the credibility of the film. Every scene he is in is laughable either because of his look or how poorly his lines are delivered. Congratulations  Peter Sarsgaard I think you just earned your Razzie. Amanda Waller shows up for a couple of scenes. Whose Amanda Waller? I’ll tell you when the film does something with her.

Honestly I really never felt like Martin Campbell really left much of a mark on this film. Nothing about the direction felt out of the ordinary. I suppose he did show up and give the film a very pretty art direction and thats worth something right?

Overall Effectivness of the Film: 4

Green Lantern really does try and at times it does succeed. Ryan Reynolds does the best job he can and the visual effects are great for the most part. Even the space sections(no matter how brief) are pretty cool and entertaining. Everything else about this movie is a resounding “meh”. Some things work enough while others things are down right terrible. The script is really what kills this film. When its not writing terrible dialog its bringing in pointless characters and dead end sub plots. That said the movie didn’t fail as hard as some people are making it out to be. There were times when I really enjoyed watching this movie, but as an overall product this movie does not succeed.