“There should be a “Captain” in there somewhere. “

After a couple of overly complicated and convoluted sequels Pirates of the Caribbean returns to a more straight forward storyline with a new director,Rob Marshall of Chicago and Nine fame, and an almost entirely new cast. Only Johnny Depp, Geoffry Rush, and Kevin McNally return from past films to reprise their roles. While I have to say that I’ve enjoyed all of the films so far Dead Man’s Chest and At World’s End both felt entirely too long, convoluted, and overall full of pointless subplots that didn’t go anywhere. On Stranger Tides is a remedy to this as it goes back to some of the principles of the first film as Jack Sparrow rushes to find the fountain of youth before the Spanish and British navies can get to it first. On Stranger Tides also introduces us to an almost entirely new cast made up of Ian McShane, Penelope Cruz,  and Sam Clafflin who play Blackbeard “the pirate all pirates fear”, Angelica; Sparrow’s new love interest, and Phillip Swift; a missionary who falls in love with a mermaid. While this certainly looks like a new start,the film has actually been down sized in scope and size in comparison to the last 2 films. Is this a bad thing? Are the Pirates worthy to sail  for another sequel or has the series finally gone overboard?

Pirates of The Caribbean starts out with Jack Sparrow(Depp) in London trying to save his loyal first mate Gibbs(McNally). In doing so he alerts the British to his presence and is eventually captured.  After being captured Jack runs into Hector Barbossa(Rush) who now has a peg leg and is working for England as a Privateer. Jack learns that there is another person claiming to be Jack Sparrow in England who is trying to put together a crew. After figuring this out Jack escapes from the British and searches for the imposter. Eventually he runs into a former lover Angelica(Cruz) who wishes for Jack to journey with her to the Fountain of Youth. For those of you who remember At World’s End, Jack has a map that shows the way. Eventually Jack is tricked into joining the crew of Blackbeard(McShane) with his former lover Angelica. At the same time as all of this is happening Gibbs is still trapped by the British(after being captured yet again) and is then forced to work with Barbossa who is also setting out to find the Fountain of Youth. As the movie continues you find out that not only are Blackbeard and The British looking for the Fountain but so are the Spanish. The movie turns into a race between the three groups to see who can claim it as their prize.  As the journey unfolds Jack and gang run into many mystical things like Zombie pirates and mermaids before they finally reach their destination.

In a series that has gotten overly convoluted and had began taking itself a tad too seriously this film sets things straight(er). I will start by saying that this film actually has a pretty reasonable run time as it is 2 hours and 17 minutes which is actually quite a bit shorter than Dead Man’s Chest(2 hours and 31 minutes) and At World’s End(2 hours and 49 minutes). This is huge because one of the biggest complaints about all of the films is that they are simply too long. On Stranger Tides tells a much leaner story than the past entries and the story really benefits from it.  The story is overall a lot of fun. There are plenty of things going on, but never does the film lose its bearing or forgets where its going. The addition of Blackbeard is actually a pretty cool one. I’m sure plenty of people will complain that he wasn’t vicious enough or angry enough, but I actually really enjoyed the film’s interpretation of his character. He really doesn’t do a whole lot besides when he needs to. In the movie Blackbeard incinerates a guy who was part of a rather large group of mutineers. Why does Blackbeard pick this guy? He doesn’t say, but he does explain that he has to kill people every once in a while so that he can live up to his reputation. Sure he doesn’t come across as the dark evil soul that many stories talk about, but he does his share of randomly evil stuff. Aside from Blackbeard the most interesting part of the story is the continuing rivalry between Barbossa and Jack. Those two characters have always been the highlight of the series and this movie plays that up quite a bit. Sometimes they’re friends and sometimes they’re enemies(and in true pirates fashion they are switch back and forth between friend/enemy multiple times in the same scene). Its fun to watch. The biggest problem with the story is that the whole time you’re watching you can’t shake the feeling that it all feels pretty familiar. How many times in this series have we seen multiple groups of people racing to find the magical object? How many times have we seen Jack change sides about ten times? How many times has there been a Mcguffin that pretty much drives the plot in a single direction the entire film? These movies are still fun, but after seeing my fourth Pirates of the Caribbean movie I will say that if this series wants to continue making films then it better start changing things up a little bit because after doing very similar things 3 times it starts to get a little stale and while I don’t think that On Stranger Tides is stale, but it comes incredibly dangerous to becoming old.

Pirates of the Caribbean still sports its hilarious dialog, over the top action, and fun filled characters. Johnny Depp slides back into the role of Jack Sparrow as if he never left it. He is still hilarious as the greedy,half drunk, still intelligent pirate. What makes Jack so much fun to watch are the situations he constantly finds himself in. The film actually pokes fun at this in the film as Barbossa tries to construct a plan while Sparrow just runs into the mess explaining that he’ll find a way out after he’s got the things he’s there for. Rush remains the second most fun character to watch as the also intelligent, arrogant, slightly eccentric Barbossa. Rush has a way of commanding pretty much every scene he’s in with the hilarious expressions he pulls off constantly. In this film he begins without a leg and this movie makes plenty of cracks about his missing leg that are also funny. Lastly what makes both of these characters so great is just the way they are written. The things they say, and the way the act really makes not only this film, but this entire series what it is. The series also continues to deliver on some really fun action. While the epic scale of At World’s End may be missing; the actual suspense during the action scenes in this film are far higher. My favorite sequence in the entire film is when Blackbeard’s crew are trying to catch a mermaid. The scene is very well done as there is definitely this feeling of not knowing how everything would play out. When the mermaids start to show up there is the very dark creepy feeling that emits from them as sailor after sailor begins to fall for their charm. Once the mermaids start to attack its like all hell breaks loose as the sailors fight to survive. I definitely thought the portrayal of mermaids as vicious creatures in this film was terrific. They were beautiful, creepy, and dangerous. Aside from that we get to see a massive sword fight at the end when all of the groups searching for the fountain eventually cross paths. These action scenes were fun and over the top, but they still felt relevant and natural; a thing past films have had a hard time dealing with. If I have one small complaint about the action its that things definitely feel less improvised and more choreographed than past films. This is likely because director Rob Marshall has pretty much built a career on musicals thus far which are all choreography and quite a bit less improvisation. Its a small gripe, but in all of the Pirates films some of the most fun about them is the feeling that things just sort of happened.

Overall I would definitely say that On Stranger Tides is an improvement over the last couple of films. Though it may drag a little bit in the middle it doesn’t feel overly long or pointless. The acting is still great fun, the story is straight forward if a little bit familiar, and the action  is enjoyable. The film never blew me away or surprised me, but it still entertained which is essential in making  a good blockbuster. The film avoids over explaining things(in fact it pretty much just goes along and doesn’t explain anything) and the film is more enjoyable because of it. While Pirates of the Caribbean On Stranger Tides never does anything too exceptional it still passes as a very enjoyable blockbuster. As a film it remains as good fun, but still doesn’t reach to the heights of the original that was a great movie. 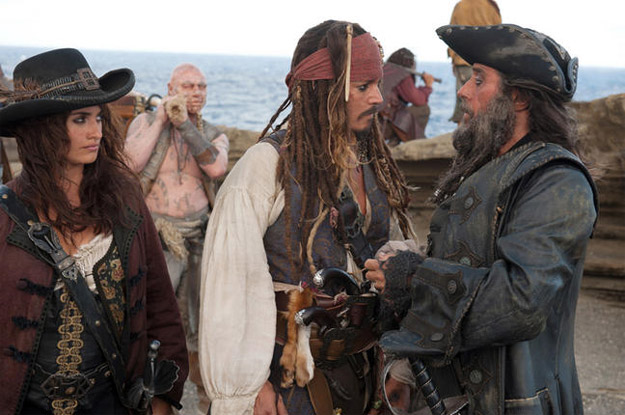 On Stranger Tides presents a very lean to the point story that is fun to watch even if it does feel very similar to past films. As a Blockbuster the story works great, but if this series wishes to continue then the story for the next film really needs some fresh ideas. The formula of the first three films is beginning to wear a little thin.

Depp and Rush are definitely having a lot of fun playing these roles and it is very evident in how the characters talk, act, and are presented. Its always great fun watching Jack Sparrow, Captain Barbossa, and Joshamee Gibbs on the big screen. Ian McShane does a great job as portraying Blackbeard. He may not come across as evil, but in this case actions speak much louder than words. Cruz does a solid job playing Jack’s lover interest(she’s also far more interesting to watch than Keira Knightly as Elizabeth Swan).

Rob Marshall does a great job for his first movie in the field of blockbusters. There is some great cinematography and the landscapes look beautiful. He is able to match the same tone as Gore Verbinski’s tone rather well as the film never feels or looks that different from its predecessors. He delivers well on action even if it does feel less improvised and more choreographed.

Overall Effectiveness of the Film: 7

The film delivers a pretty solid piece of entertainment for early in the summer. The film is funny, entertaining, and widely appealing. Visual effects, explosions, and mermaids all look great(wink, wink). The movie does a great job at doing what it sets out to do. That being said I never felt it was exceptional at anything nor was I ever surprised or blown away by anything happening in the film. It was exactly about the level I expected. There is nothing wrong with this at all, but it does separate a good blockbuster from a great movie. Pirates of the Caribbean On Stranger tides is not a great movie, but it is a good and enjoyable one.